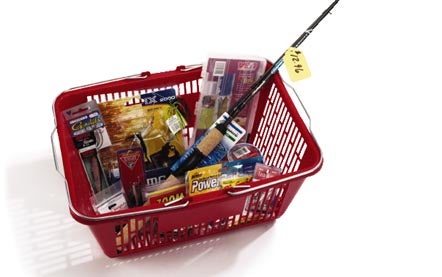 Sometimes the best-laid fishing plans are for all the wrong fish. A recent family camping trip in southwestern Maine, for example, was supposed to include sea kayaking and striper fishing. A howling wind killed the kayaking, and the stripers just wouldn’t play. My wife curled up with a book while I wandered back to a small wooded pond beyond the campsites.

Another guy was there, stashing some spinning rods in a rusty pickup as I approached. Yes, he said, there were bass in the pond. Pretty good ones, too, since it was a private campground and nobody fished it much. Everybody wants the stripers, he told me, and nobody bothers the largemouths here.

Not one to look a gift fish in the mouth, I quickly decided on bass fishing and just as quickly realized that my striper gear wouldn’t cut it for this little pond. But this was supposed to be a low-cost trip, so a conference with the Treasury Department got me only a sparing $50 budget for bass tackle at the local Wal-Mart. In the process, though, I rediscovered just how inexpensive-and simple-bass fishing can be.

IN THE STORE
I started pawing through the rack of cheap spinning rod-and-reel combos for something that might work. The reels were okay, but the rods were like opening night at Weight Watchers-fat butts and soft middles. So I ducked into the next aisle to check out separate components and found a $13 rod that felt great and a $10 spinning reel that matched (see sidebar). These were both less expensive and better than the combo offers-it obviously paid to shop a little.

Next I found a spool of off-brand nylon mono for $3. I grabbed the 12-pound-test, deciding that was the heaviest line the little reel could handle while still leaving enough strength to pull my precious few lures free from most snags.

That left me with $24. First things first: in this case, some plastic worms-the most basic of all largemouth lures-and matching hooks. Green pumpkin, my favorite worm color, was out of stock, so I grabbed a pack of 7-inch Berkley Power Worms in electric grape. Later, I could cut an inch or two off the worm’s front if the bass demanded a shorter version. Next came a five-pack of size 3/0 Gamakatsu offset-shank worm hooks. These were the most expensive ones in the store but well worth the cost for their quality and sharpness. Then I found a pack of 1/16-ounce worm weights, cone-shaped to avoid snagging and just heavy enough to take the worm slowly down through the lily pads.

With about $17 left, I added a No. 11 floating Rapala (pricey, but there are no real substitutes), a no-name surface popper, and an equally anonymous spinnerbait for $1 from the bargain bin. Some small jigheads, 3-inch plastic grubs, and a pack of Zoom Fluke soft-plastic jerkbaits in an Arkansas Shiner color rounded out the collection-and I still had the $1.88 needed for a parka-pocket-size tackle box to hold all the small stuff. [NEXT “ON THE WATER”]

**ON THE WATER **
I hauled the kayak on my shoulder through the woods and eased out on the water, ready for some low-budget bass. The gale that lashed the coast was no more than a breeze here among the trees, which made getting around easy. My lightly weighted worm landed with a quiet blip next to some lily pads, drawing line slowly across the surface as it sank. I saw the line make a sudden dart and set the hook. A chunky largemouth jumped once, then bulldogged under the kayak before giving up.

Through most of the afternoon, the worms worked well until most were fish-shredded beyond use. Then I started experimenting with everything else. Neither the popper nor the spinnerbait drew fish very well. The bass seemed shy, unwilling to make a reaction-style, slashing strike as they sometimes do. The Rapala and the soft-plastic jerkbaits, on the other hand, worked as well as the worms. Twitching the floating plug gently and then leaving it motionless frequenntly brought either a swirl or a soft, sucking kind of surface take. Slow-twitching an unweighted fluke brought a similar response underwater.

The key was in having the right combination of lures to allow those sorts of experiments on the water. If the fish had been more aggressive, ripping a spinnerbait or surface popper past likely bass cover might have worked better than a slow-moving plastic worm. There’s often no way to tell this ahead of time, but even with the few dollars I had to spend it was possible to cover most of the bases.

I was back in tourist mode that evening, having a leisurely dinner with my wife at an inn near the beach. There were some striper guys at the next table, griping loudly about the weather and lack of fish. One said he’d hauled his $30,000 center-console boat all the way from Connecticut but couldn’t launch for the rough water. That’s a lot of money for no fishing, I agreed, smiling with great satisfaction.

The (Slight) Damage
While the gear I bought would be suitable for small bass ponds just about anywhere, some waters could require different choices. Shop carefully and you’ll have enough left over for a pair of Milky Way bars.–J.M.