The Greatest Shows on Ice

Grab your auger, stock up on hand warmers, and if you're truly insane, bring your swim trunks. It's time for this winter's finger-numbingest ice-fishing festivals. 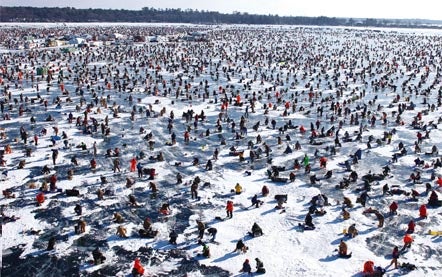 Devils Lake is the site for some serious competition when 150 two-person teams clash in a perch tourney with a $10,000 first prize. Spectators are welcome to wander around and check out how the ice savants use underwater cameras and electronic fishfinders. This is the first in a series of five contests that last through March.

Touted as the world’s largest ice fest, the Jaycees’ shindig draws more than 12,000 competitors to Gull Lake. For three hours, anglers slug it out for over $150,000 in cash and prizes (including the first prize of a Ford 4×4 pickup). In the On Ice Olympics, kids compete for medals by doing some jigging of their own.

The burbot-a.k.a. eelpout, a freshwater cod-is the inspiration for a humdinger of a party, now in its 26th year. Ten thousand people swarm the 4-foot-thick ice and do a lot more than fish. Highlights include the Eelpout Peelout 5-mile run, the Best Eelpout Encampment Contest (bribes are accepted), and the Polar Plunge.

On Pike Lake, more than 600 anglers compete for the biggest fish of whatever species their hearts desire-could be a sucker, a perch, a northern pike. Proceeds benefit University of Minnesota-Duluth Athletics. The first-place winner takes home a Toyota truck, and the coveted 100th-place prize is $1,000.

Up to 5,000 participants hit 28,800 acres of ice in a “togue” tournament (local vernacular for the rogue lake trout that the state has been trying to remove since it supplanted native Atlantic salmon) with a $25,000 purse. The weekend includes snow sculptures, a polar ice dip, and the naming of the ice fisherman of the year.