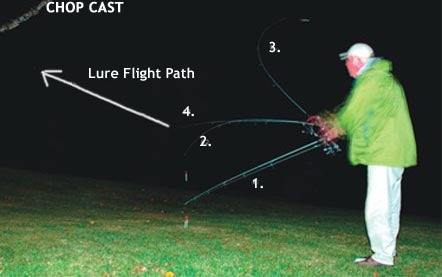 Chalk this up as a kind of true fishing confession. The time-honored instructions for casting spinning and baitcasting outfits, which I’ve often given, are still perfectly valid, but I frequently don’t use them. Why not? There are some newer casting strokes that are usually more efficient.

For the past 50 years or so, fishermen have been told to make a fairly long rearward stroke, extending behind the shoulder to help load the rod before bringing it sharply forward and releasing the lure. This basic method first evolved with bamboo and fiberglass rods, long before the invention of graphite. Rods made of those early materials bent and unbent slowly, which meant that a fairly long casting stroke was needed to allow the rod to flex properly. Newer graphite models are lighter and stiffer, bending and unbending much more quickly. Shorter, faster, and more efficient strokes are thus possible, but-so far, at least-have seldom been described. The following two casts take into account those new properties and work great with some of today’s rods:

THE CHOP CAST (see photo above)
Much fishing involves endless repetition. Hitting a series of shoreline targets with a spinnerbait for bass is a good example. The short, fast stroke of a chop cast makes easy work of constant casting from a boat. Because the motion takes place completely in front of the body instead of extending behind the shoulder, it will also keep wading anglers from tangling with tree limbs or other obstacles behind them.

Your lure must be heavy enough to bend the rod tip during the cast, which generally means using lures at the upper end of your rod’s rated weight range. Casting and spinning rods designed for spinnerbaits or crankbaits are more flexible and perform the chop better than stiffer rods intended for jigs or plastic worms. As for reels, it’s easier to learn on spinning or spincasting models. The requisite short stroke makes it tricky to avoid backlash with a baitcasting reel (see sidebar), but it can be done with practice.

Hold the rod with a two-hand grip slightly above waist level, tip pointing downward. To cast, bring the tip sharply upward to about 45 degrees above horizontal. Without stopping, force the rod sharply downward in a chopping motion to horizontal again, releasing the lure as you do so. Your hands should only move about 8 inches during this stroke. The rod tip and lure, traveling through an arc, move about 3 feet. You’ll quickly pick up the right timing. Maximum casting distance is about 70 feet with common bass tackle.

The difference: The classic back-and-forth casting stroke that you once did over your shoulder has been condensed into a very short, quick flip. Although the same bending and unbending of the rod is taking place, it occurs more quickly and efficiently over a shorter distance. If you see a breaking fish or another suddenly available target, you’ll get a lure on the spot more quickly with this cast. And in the course of a day’s fishing, you’ll be expending much less effort.

[NEXT “Story Continued…”] THE CIRCLE CAST
This cast also involves a short, fast stroke in front of your body. Unlike the chop, in which the rod tip goes up and down, here you move the rod tip in a circle before you release the lure. The circular motion effectively creates a longer casting stroke (the circle’s circumference) in a small space. This means it’s easier to do with baitcasting gear than a chop cast, although gaining accuracy takes a little more time. It also works better with lighter lures, and I use it often when I’m fishing ultralight spinning lures for trout.

The lure will fly to the left of the direction your body is facing, so stand with your target 90 degrees to your left. Hold the rod in front of you with both hands, with the tip slightly below horizontal. Using only your wrists, rotate the rod tip in a clockwise circle about 2 feet in diaameter. Accelerate it as you go to develop lure momentum and bend the tip. Release the lure as you complete the circle and the tip approaches horizontal. If the lure flies too high, you let go too late. If it hits the water in front of you, you were too early. Again, timing and accuracy come with practice.

You get the same result as you would by making a full, back-and-forth sidearm cast to your left, but the circular casting stroke is both faster and less tiring. Like the chop cast, it’s a simple way to make repetitive casts to shoreline targets from as far as 70 feet away.

Neither of these specialty casts is good for extended range. If distance is essential, a longer casting stroke is required and I revert to the traditional full back cast technique that you’ve doubtless read about and practiced for years. But most of the time, you don’t need a big windup. The fish are right in front of you, and a quick, short stroke is the best way to get there.