The Bass Are Ready to Party

All you have to do is find their "Bourbon Street." 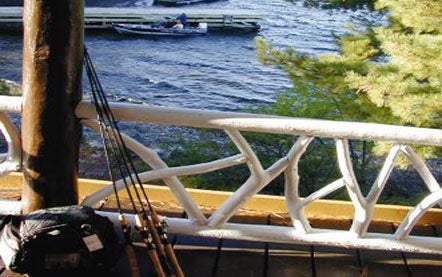 Prespawn? The first thing you need to know is that it does not exist in the official biology of bass. It has no basis in science. You will not find it in ichthyology texts. The ugly truth is that prespawn is a confection cooked up by anglers.

“Bass fishermen coined the term,” says Gene Gilliland, the fisheries biologist and eminent bass expert at the Oklahoma Department of Wildlife Conservation. “Biologists have sort of gone along with it as far as trying to explain what’s going on physiologically with bass just before spawning takes place.”

And what is going on with bass then?

“Well, winter is just ending, and all through it bass have been very sedentary and spread out across a lake,” Gilliland says. “But now things are warming up, so bass come together and stage in places near spawning areas, feeding aggressively before they go on to spawn, which is their big event.”

So the prespawn is not official, but it’s big and important?

So, it’s like the pregame at a Super Bowl-unofficial, but big and important. Imagine, say, Green Bay and New England fans leaving their frozen spider holes up north and converging on the French Quarter in New Orleans before the big game. Imagine them gathering on Bourbon Street, drinking and eating and warming up (so to speak) for the game because they know that once it starts they’ll be all business-locked in their seats (maybe on the edge of them), busy biting their nails and hoping.

So that’s kind of what bass experience in the prespawn?

And that’s why bass anglers felt compelled to give it a name?

“Of course,” Gilliland says. “It may be the most important time of the year for bass fishermen-their big event, if you will. It’s the one time they’ll consistently find bass in one area, feeding aggressively. So understanding what’s going on during the prespawn is very important-to a fisherman.”

[NEXT “Click for More”] Understanding, for example, some of these very official facts about this unofficial period: When: The prespawn begins when water temperatures in a bass’ winter digs reach about 48 to 50 degrees, which typically coincides with the lengthening of days. These environmental factors trigger a secretion of hormones that signals bass that spawning is imminent, thus prompting them to begin moving closer to spawning areas. “It’s not a sudden, fast movement, but it’s pretty steady once the conditions are right,” Gilliland says. Of course, this doesn’t happen in all parts of the country at the same time. And it isn’t even simultaneous in all parts of the same lake. “One side of the lake might warm up earlier than another,” he notes. So the most important thing for an angler to keep tabs on after the winter solstice is water temperature.

Where: Typically the staging area (the Bourbon Street for prespawn activity) will be close to the spawning site, which is usually a shallow shoreline or flat within easy reach of deeper water-just in case a late cold front comes through. “If water temperatures fall in this early period, bass will retreat back to deeper water,” Gilliland says. “So they like to stage around dropoffs, ledges, steep points, and other contour changes along travel corridors between the wintering areas and shallow spawning sites.”

The prespawn party gets rowdier as the water temperatures climb through the 50s and into the low 60s. “The bass begin to feed more and more aggressively to store energy they’ll need for the upcoming spawn,” Gilliland says. “They’re feeding with a purpose now. And to some extent, they’re competing for whatever food is available.”

But once the thermometer hits 65, the party is over; the fans move into the stadium. “When bass move onto beds, they’re all business. They might strike to protect their territory, but that’s pretty much it.”

And heere’s one of the most important things to remember about the prespawn: Bass, like football fans, will come back every year to a great party spot. “They have a very small home range and are pretty much creatures of habit and routine,” Gilliland says. “So, if you find a good staging area, chances are those fish will be there next year and the year after.” All in all, that’s a lot of information about a period of a bass’ life that doesn’t officially exist-but it’s just the beginning. [NEXT “Click for More”] Little Creatures
_Big lures catch big bass, right? Not always. _When hefty largemouths turn finicky, as they commonly do after a front or in cold water, a smaller bait often draws more strikes. But not all bass baits are available in smaller versions, limiting an angler’s options. That problem has been mitigated recently with the introduction of downsized creature baits. These soft plastics with bulky bodies and myriad arms, tentacles, wings, and flappers are available in shorter, thinner models. Now you can get the profile of a smaller lure with all the action of a larger one.

Averaging 4 inches in length, these little creatures are ideal for flipping and pitching to close-mouthed bass in matted hydrilla, as their smaller size allows them to penetrate cover more easily. Rig them Texas-style, burying the point of a 4/0 hook into the body to make it weedless. You don’t need a heavy sinker; 3/16 or 1/4 ounce will easily pull them through thick greenery. When fishing cover like this, most pros let the lure sink to the bottom, then shake it while simultaneously yo-yoing it up and down. Many feel the erratic movement of all those appendages entices fish from a distance.

Little creatures can also be swum over mossy bottoms or submerged vegetation and around stumps and rocks to great effect. They make excellent Carolina rigs, too. Bottom line: They’re well worth the small space they’ll take up in your tackle box. — Steve Price