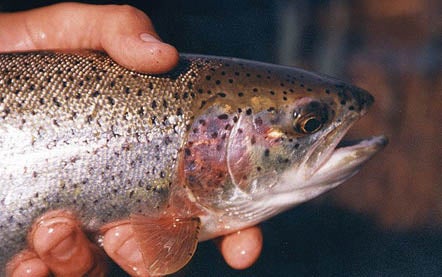 I don’t remember the first time I put action on a dry fly-there’s been too much water under the bridge since then-but I do remember the circumstances. It was a summer evening 30-some years ago on a creek I fished several days a week on the way home from my job as a landscaper. My tackle was always in the cab of the pickup. If the weather was right and I didn’t get sidetracked, I was on the water and rigged up before the swarms of caddisflies materialized. As often as not, there was a half hour or so before dark when the brown trout went insane over those little brown bugs.

I know I had recently read Leonard Wright’s 1972 book, Fishing the Dry Fly as a Living Insect, because that’s where I got the idea-and I had been looking for an idea because, as violent as these feeding frenzies became, I was only occasionally hooking trout by fishing a traditional upstream cast with a dead drift. Wright called his technique for putting action on a dry fly “the sudden inch,” and it seemed simple on paper. Instead of casting upstream, Wright suggested casting down and across the current with an upstream mend and giving the fly a slight upstream twitch as it neared a rising trout. He contended that the fly should not only look like a real insect but also act like one, and that the approach was ideal for swarming caddisflies that bumbled and skittered on the water.

Although I tried to execute Wright’s technique, it didn’t work perfectly that first night. My clumsy attempts at twitches resulted in motorboat wakes that spooked the fish. The wild trout in that stream didn’t get much fishing pressure, but even though they weren’t very sophisticated, they weren’t entirely stupid.

The best fly action is an upstream tick so subtle that you almost can’t see it at the end of your leader. Ideally, the fly should move no more than half its hook length. That’s not much more than a hairbreadth when you’re fishing a No. 18 mayfly dun, but visualizing it that way helps develop a light touch. Make a few test drifts-well short of the fish but in the same current-until you get the twitch just right. Use the rod tip to impart action to the fly, but remember that the length of the rod will amplify the motion of your wrist.

Trying for that kind of subtlety, I often undershoot the movement and the fly doesn’t budge at all, but that’s okay. It’s still a perfectly good downstream dead drift that might draw a strike, so I just fish out the drift and then try again on the next cast. The hardest part to learn is when to use this technique. It’s a smart move if swarms of caddisflies are mating, and also during mayfly hatches, while the insects flutter their wings and scoot forward on the water before getting airborne. But the best clues for figuring out when to enliven your fly come from the fish. Watch the rise forms: If most of the trout are sipping quietly, they’re probably concentrating on the dead-drifting flies; if they’re slashing, they’re going for the ones that are twitching.

No rule is set for determining how far ahead of a rising fish the twitch should be timed. Some say a foot and a half. Others prefer 6 inches. I’ve never developed a firm opinion on this, but I think that erring on the side of more distance is better than doing it too close to the fish. I have occasionally given a fly what I thought was a perfect little scoot only to have an interested trout turn away at the last second. That’s happened often enough to result in this principle: Regardless of what the fish and the bugs are doing, don’t add action to the fly until you’ve exhausted the dead drift first.

Sometimes a good fish is quietly sipping dry flies and I can’t get him to bite with a dead drift, even after changing flies, adjusting my drift, lightening my tippet, and doing everything else I can think of. So as a last-ditch gesture, I give my fly a little scoot as it drifts down to him, and every now and then he’ll just eat it. There’s no telling why.

High-Riding Dries
It’s possible to put subtle action on any dry fly, but some patterns stand up to it better than others. The best are those that use buoyant materials and ride high in the water, such as an Irresistible tied with a clipped deer-hair body and a stiff collar hackle. Other good patterns include the Humpy, Elk Hair Caddis, Goddard Caddis, and Stimulator.