It took 100 years to go from silk to superline, but things are moving faster in the 21st century. Better hang on to your fishing hat. 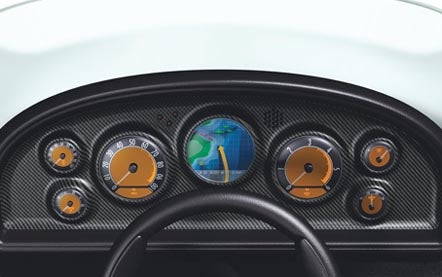 Forecasting the future of fishing is entertaining, enlightening, and a little bit frightening. Looking forward to the next 110-or even 10-years, we’ve made a few predictions based on advanced technology that is already known though not entirely ready for prime fishing time. But it will be. Some of it may seem far-fetched, but ask yourself: What would you have said if 20 years ago someone told you that one day sportsmen would be able to carry a small device that communicates with satellites to pinpoint their exact location? Technology marches on, and it’s just a matter of time before computers will kick the old-fashioned tension-controlled baitcaster to the creek-and that’s just the start.

**THE BOAT **
** Behind the Wheel ** Get in the driver’s seat of a modern luxury automobile, and you get an idea of where a boat’s console is headed, with everything laid out before you: tach, speed, voice-activated GPS, and steering that can respond to the navigation unit. Melding voice-recognition technology with cutting-edge guidance systems, forthcoming GPS will coordinate visuals with a computerized “pilot” to instruct you turn by turn through a route and, in time, will recognize your voice and respond when you tell the craft where and when to turn.

Under the Transom How to power it all, including the main propulsion? The answer is fuel cells, power sources already in development that produce energy, instead of storing it like a battery, by changing the chemical energy of a fuel (hydrogen) and an oxidant (oxygen) to electric energy and heat. Bonus points: no moving parts, no noise, no emissions besides water. This technology is already sufficiently developed to power concept cars, buses, and even some buildings and hospitals. “Fuel cells are a long way out, but you’re going to see them,” says Kelly Grindle, group vice president of the marine electronics group, maker of Minn Kota trolling motors.

THE L URE
Fish’s-eye View Already Berkley is testing $600 lines that can transmit data-water temperature, depth, etc. Someday a camera is going to fit into a fishing lure. Consider that some fiber optics are thinner than human hair, and that digital video cameras are currently embedded in cellphones. Generation next will be putting a cable into a fishing line and a lens into your lure to see the strike.

[NEXT “Story Continued….”] ** Set It and Forget It ** With the unavoidable union of soft and hard baits, tomorrow’s lures will swim precisely like a fish, with photographic and computer-aided replication of colors and scale patterns for the ultimate in verisimilitude. Not only that, but the lure, says no less than an exec at Rapala, will be electronically programmable to dive to specific depths and speeds.

**Food, Sex, and Aggression **Today’s biodegradable worms and lizards are cool. But molecular manipulation within them? Even cooler. Take Berkley’s soft-plastic look-alikes, called Gulp!, newly made with water-soluble polymers instead of petrochemical plastic. Given further lab work, the baits will not only taste better but also stimulate a fish’s lips, id, and limbic system. “We’re always doing tests with chemoreceptors,” says Berkley’s Brian Thomas of the chemistry of scent and flavor. “There are things in a bait a fish likes, and we’re trying to refine them to the amino acids, proteins, and other chemicals that trigger fish.”

THE REEL
**Digital Display **A miniature LCD readout will show your lure’s depth and speed, the water temperature, and an image from the in-lure camera.

THE TROPHY
**A Mount That Moves ** Someday you’ll say good-bye to skin mounts and graphite replicas to commemorate a big fish for posterity. The alternative? Virtual trophies rendered and even animated-no, not like a Bugs Bunny cartoon, but more like your ownn personal version of a movie. It works like this: With a lens in the live well, reverberations called pings are sent out in a special liquid medium, and your fish is scanned to capture its image. Then the image is replicated, using holographic technology, to make a virtual model with the appropriate size, proportions, textures, colors-even movement. Go ahead, tell that fish story. You have proof that it’s true.