David Moore (left) and Brian Nordberg at the 2002 championship on Romania's Lake Raduta. 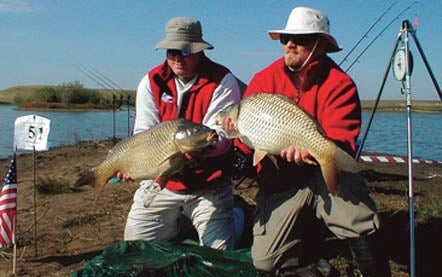 New York City may not get the 2012 Summer Games, but for the first time ever, the United States will host the World Carp Championship, known as the Olympics of carp fishing. Some 200 two-member teams representing at least 29 countries (including Latvia, Norway, and South Africa) will hit New York’s St. Lawrence River from June 5 to 10. They’ll battle not for gold but for bragging rights and big cash payouts, including a cool million for any angler who breaks the 50-pound 4-ounce New York state carp record.

England, a powerhouse in international carp fishing, is a favorite going in, sending two previous world-champion teams. But according to the American Carp Angler Society’s David Moore, the only Yank to participate in both of the last two World Carp Championships, Team USA has an excellent shot this year. “We have more teams represented than any other country, and we’ve got home turf.”

Americans have never won this 10-year-old event, but with this year’s venue just 60 miles from Lake Placid, the site of the greatest upset in Olympic history, U.S. carp-angling fans everywhere hope for another miracle, this time on open water instead of on ice.