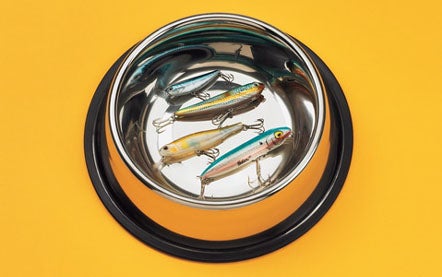 It is the most unassuming topwater lure, just a painted, torpedo-shaped body with hooks attached; no cupped popping face, sputtering propeller blades, or any other built-in flashiness. So why go to the trouble of tying one on? Because only a stickbait lets you use that side-to-side, injured-baitfish technique known as walking the dog. Good dog walkers can steer their baits across the surface, into hard-to-reach places like the spaces beneath boat docks and overhanging limbs. And easy-to-cast stickbaits cover lots of water, which is important when you’re fishing for the scattered bass that feed over points and flats in June.

First Steps
A stickbait has a weight in its tail that slightly elevates its nose when it’s resting on the surface. This position allows it to cut and glide from one side to the other when you twitch your rod tip on a semislack line.

To work one properly, hold your rod tip low and quartering to the side, put some slack in your line, and twitch your lure with sideways sweeps of the rod tip. Try to establish a rhythm to your twitching. Twitch pause, twitch pause, twitch pause. Getting the timing down takes practice. If you’re having trouble getting the bait to cut and glide properly, slow the pace and make sure you’re giving your lure enough slack after the twitch. Most beginners twitch too quickly on a too-tight line, preventing the bait’s nose from turning and gliding. The lure should be moving more to the left and right than it is toward you.

Once you’ve mastered the basic dog-walking retrieve, you can teach your stickbait to walk to one side or the other. You steer by allowing the lure an extra half-beat after it cuts in the direction you want it to go. It’s a twitch-twitch pause, twitch-twitch pause rhythm. The bait glides in the direction the lure is pointing after the second twitch. To change directions, twitch once, pause, then start the double-twitch rhythm again. Try to swim your stickbait under boat docks, walk it around grass clumps and other snags, and purposely bump cover, a trick that often sparks strikes.

Meet My Canines
My three favorite stickbaits are different versions of Heddon’s Spook family. The plastic 3/4-ounce Zara Spook is a good all-around performer. In dead-calm, shallow water where bass may shy from the Zara Spook, I’ll switch to the smaller 1/2-ounce Super Spook Jr. When there’s a hard chop on the surface, or when I want to pull bass up from the depths in clear water, I’ll step up to the more visible, 5-inch, 7/8-ounce Super Spook.

I leash these lures to a 61/2-foot, medium-action graphite baitcasting rod and 15-pound-test line. The rod’s soft tip doesn’t jerk the bait too abruptly, and the thick monofilament won’t cut into the water and pull the bait’s nose down, hindering its action. >