A Load of Crappies 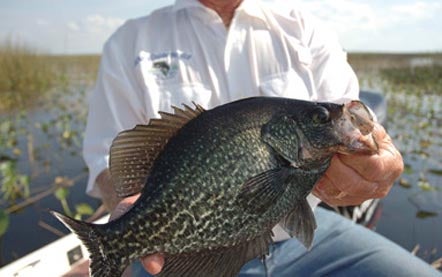 Between Mike Bennis’ minnow bucket and Mabel Henderson’s frying pan, it was a good trip all around. Florida’s finest crappies scarfed down the minnows, and we scarfed down the crappies. It was love at first bite.

Things didn’t start that easily, of course, because they never do. As we idled the bass boat through the morning fog out from Henderson’s Fish Camp to the broad reaches of Florida’s Lake Istokpoga, Bennis was grumbling. “The fishing hasn’t been right,” he said. “You should have been here last month. Darn this fog.”

This is typical guide talk, to keep sports from having unrealistic expectations. I’ve heard it before. As Bennis and I chatted a bit, though, I found out that we were fishing at a time when the lake’s crappies were in a transition phase.

Prime open-water fishing for schooling crappies usually happens from September through November, Bennis told me. Spawning season, when they are building nests in shallow weedbeds, starts as early as February in Florida and extends into April. During the transition, with the fish on the move, neither open-water nor shallow fishing would be as good as it could be.

“So when in doubt,” I said, “try everything!” That’s exactly what we proceeded to do.

JIGS AND GRUBS
We rigged 1/16-ounce Blakemore RoadRunners (small jigheads with spinner blades) on ultralight spinning rods spooled with 4-pound-test monofilament, adding a 1¿¿-inch soft-plastic brown grub to each bare jig. Following orders, I made a long cast to the rear with one rod and a medium-length cast with the second. As Bennis used the trolling motor to move the boat along a 10-foot-deep channel, he explained that different line lengths off the rods would spread the trolled lures vertically. The one on the longer line would run deeper.

“Don’t set the hook if you feel a fish,” he said. “That’ll tear it out of the thin-skinned mouth. Reel in gently and you won’t have a problem.”

The channel was adjacent to shallow weedbeds where crappies would soon begin spawning. It was a perfect staging area. Watching the fishfinder, I was starting to see fish spread from 5 to 8 feet deep when one of the rods bowed and bounced. As I reeled in, Bennis tossed a marker buoy over the side. “Supper,” I said, tossing the fish into the live well.

[NEXT “Story Continued…”] Additional passes past the buoy brought in more crappies. “So today they like red,” Bennis said, unhooking one that had taken a red-headed jig. Crappies are indeed color selective, and what they go for can change daily, if not hourly. That’s why crappie jigs come in such an array of hues. Bennis said I could simplify things by sticking with the basics, such as white, black, chartreuse, yellow, and red, one of which would usually catch fish.

After we caught a few more , I suggested we try the shallows while the minnows were still lively. We took a break, then we moved on.

MINNOWS AND BOBBERS
Fishing with a crappie pole is a deliberate exercise. Bennis set us up with 10-footers-anything longer feels clunky, he said-with about 7 feet of 8-pound-test monofilament tied to the tip. There was a fine-wire, size 6 Aberdeen crappie hook tied to the other end of the line, a small split shot a few inches above it, and then a round, nickel-size bobber 30 inches above that. The water in the broad patches of spatterdock where we fished was 3 to 4 feet deep with a sandy bottom- prime spawning territory for crappies.

Rigging each hook with a 2-inch-long fathead minnow, we used the poles to dip the baits into openings among the weeds. The setup was perfect for the conditions. Any sort of cast and retrieve with regular tackle would have been impossible because the cover was so thick.

It took three or four dips in different spots before my bobber darted under, and I was soon hauling a crappie from the weeds. Later, I tried dipping andd twitching a small soft-plastic tube jig with the same tackle, but with no success. Prespawn, the fish were simply not being aggressive. Sweetening things with a live minnow helped, though, and I soon had another one.

Back at Henderson’s, Bennis, good guide that he is, filleted our mess of crappies. We hit the market for flour, eggs, and canola oil, then stopped at a stand for tomatoes and lettuce. The beer was cold. The salad was fresh. The fillets sizzled. And that is as good as it gets.

Rinse chilled skinless fillets, pat dry with paper towels, and cut into chunks about 2 inches square. Add canola oil to a depth of Â¿Â¿ inch in a cast-iron frying pan and start heating it. To make the batter, mix one egg, Â¿Â¿ cup flour, and Â¿Â¿ cup cold beer. The mixture should be about the same consistency as a thick pancake batter. Add more beer or flour as needed to get it right; the proportions aren’t critical.

Dip the fillet chunks in the batter to coat them, then add them to the pan in small batches. The oil should be hot enough so that they sizzle sharply. Use a slotted spoon or spatula to turn them after about 3 minutes. Total cooking time to get them crispy brown on both sides will be 5 to 6 minutes. Season to taste after cooking. I like a little garlic salt.