An inside account of the 25-pound bass that is turning the fishing world upside down--how it was caught, what witnesses saw, and what the successful anglers have to say 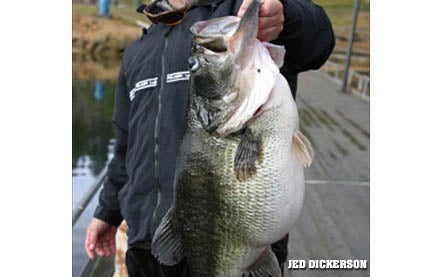 Controversy has always been a big part of the chase for the world-record largemouth bass, starting from the very beginning: George Perry’s 22-pound 4-ounce bass caught in the backwoods of Georgia on June 2, 1932. Skeptics have always doubted the veracity of Perry’s catch, pointing to the fact that there is no photo or mount of the fish, and that it was weighed on a scale in a country store, then eaten by Perry and his family. Nevertheless, Perry’s fish is now entering its 74th year atop the International Game Fish Association (IGFA) record book.

But another fish, perhaps even more controversial, now threatens to supplant it. At 6:45 on the morning of March 20, on Lake Dixon, a 70-acre drinking-water reservoir in Escondido, California, Mac Weakley, a casino gaming worker, landed a largemouth bass that has turned the fishing world on its head. His fish, which weighed 25 pounds 1 ounce on a friend’s handheld scale, will eclipse the current world record if it stands up to the rigorous standards set by the IGFA, the keeper of all fishing records. As it stands now, that is a big “if.”

Here’s how the story goes: On Sunday, March 19, Mac Weakley watched from the dock at Dixon as a few feet away stood an angler named Kyle Malmstrom, in a rented boat, throwing repeated casts over a big bedding bass. Weakley asked how big it was, and Malmstrom answered that it was around 15 pounds. “He was telling me that his wife was really upset with him because he had been here all day,” says Weakley. Malmstrom then offered to give Weakley a look at the fish and picked him up on the shore.

After taking one glance at the giant she-fish, Weakley said, “That’s Jed’s fish,” referring to the 21-pound 11.2-ounce fish that his fishing partner and best friend, Jed Dickerson, had landed in 2003, the fourth-biggest largemouth bass of all time. He told Malmstrom that it was a 20-plus-pounder.

Malmstrom dropped Weakley off on the shore and went back out onto the lake. Weakley called Dickerson, who was at home, and told him to get to the lake. Dickerson arrived and asked Malmstrom if he was going to fish for it all day. Malmstrom said yes.

Weakley says that he was sure that if he and Dickerson had half an hour with the fish, they could catch it. He called out to Malmstrom and offered him $1,000 and some free fishing rods to let them try for the bass, even showing two young anglers on the dock the money, which he had in his pocket. Malmstrom refused and fished the rest of the day, 11 hours total. But he came up empty.

Meanwhile, Weakley, Dickerson, and another friend, Mike “Buddha” Winn, worked on a plan. The trio had been pursuing the world-record bass on Dixon for five years. They knew that this just might be their big chance. They decided to get a camping permit, which would allow them to be the first ones on the lake the next morning. That night they talked strategy over the phone.

The next morning, Dickerson arrived at the lake at 4 A.M. Weakley and Winn went off to get doughnuts. At 5:45 A.M., they got their permit (Dixon allows fishing by permit only in rented boats with trolling motors) and went down to the dock, barely beating two brothers, Daniel (14) and Steve (18) Barnett, who had also seen the fish the day before. “We were the first in line at the concession stand,” says Steve Barnett. “We were pretty stoked. But those guys beat us to the water.” The brothers decided to stand and watch from the nearby dock. “We had nothing else to do,” says Steve.

On the water, the Weakley-Dickerson-Winn trio found the nest of the bedding fish and took turns casting for it. The morning was rainy and windy, which chopped up the water and decreased visibility in the normally clear lake. When Dickerson was casting, the fish bumped his white Bob Sangster rattlesnake jig three times, but he missed on each occasion. He passed the rod to Weakley, who also tried to set the hook three times withoout connecting. “We couldn’t see that well,” says Weakley.

Then, at around 6:40, Weakley felt his line twitch and swung the rod, finally hooking the fish. The bass dove for the depths in the middle of the lake. Weakley reeled the fish back to the boat. Winn dipped the net into the water and only got half of the giant fish in. It escaped and dove again. But in short order, Weakley led her back. This time Winn netted it.

But there was a problem. The jig was embedded in the fish’s back, 3 inches behind the dorsal fin. “We yelled, Â¿Â¿Â¿Oh man, it’s foul-hooked,'” says Steve Barnett, who watched the entire episode with his brother from the dock only a few feet away and says that it was “an insanely enormous bass. It was just insane how big it was.”

According to Barnett, the trio then told them that they were going to talk in private, motored out into the lake, and spoke for a few minutes. The fish was on a stringer attached to the boat. When they returned to the dock, Weakley and Dickerson weighed the fish on a brand-new handheld Berkley digital scale. The scale read 25 pounds 1 ounce, which would beat the previous world record by nearly 3 pounds.

Weakley and Winn strained to lift the fish with one arm for photos. They also shot some video. Barnett says that either Weakley or Dickerson at that point said, “Look, there’s a mark on its back and we don’t know what’s up with that.” Barnett says he and his brother were a bit mystified by the comment, replying, “We saw you foul-hook it, though.” Weakley then told Winn and Dickerson to release the fish. They did, and what might be the new world-record bass swam lazily out of view into Dixon’s deeper water.

Weakley neither measured the length and girth of the fish nor weighed it on a certified scale, two requisites of an IGFA world-record application. “At that point, since it was foul-hooked, I just said let’s weigh it and let it go,” he says. “There is no doubt in my mind that this is the biggest bass that anyone has ever seen. It is the world record. And me and Mike and Jed got to hold a 25-pound bass. No one else has ever done that.”

Although IGFA officials have said they will review the catch if submitted, Weakley says he’s not sure if he will pursue the record. He says he would turn in the scale, photos, and videotape if he did.

Ray Scott, the founder of BASS and an advisor to the IGFA, says they shouldn’t even bother. “Nobody wants to see the record broken more than I do. I’m as enthralled with the record pursuit as anyone. But there are certain things you have to do to certify the record. These guys-especially these guys who’ve been after the record for a while-knew what those steps were and they didn’t do it,” referring to the lack of measurements and failure to use an IGFA-certified scale.

Scott, known as the godfather of catch-and-release fishing, makes an exception to his philosophy for the most venerable world records, like that for the largemouth bass. “If you catch the record bass, you have to have the corpse,” he says. “Without it, we’ll never know for sure. Now only God knows.”