How to catch early season trout in overlooked ponds. 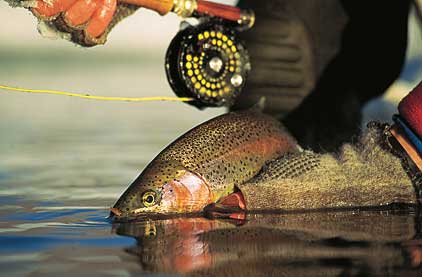 While stream trout are hunkered down and lethargic in the cold, high water of the early season, their pond-dwelling relatives have no ice jams to fight. Instead, they have the first feeding sprees of the season. If you insist on fishing rivers, you’ll miss them.

FLYFISH IN SLOW MOTION
River flyfishermen are conditioned to scraping bottom with fast-sinking lines in the early season, but that tactic doesn’t work in many trout ponds. You need a slow retrieve, but there’s no current and your fast-sinking line will sink too quickly. Counter this by using a medium-sinking line that will get deep and reach the fish but at a slow enough pace to let you retrieve without hanging up.

Many fish will be cruising near shore, so make your casts parallel to or at a slight angle outward from the bank and not straight out toward the center of the lake. Your fly thus spends more time in productive water, so you’ll hook more trout.

A size 6 Black Woolly Bugger streamer or a size 12 Hare’s Ear nymph will work just about anywhere. Fish either one singly with a slow-stripping retrieve, or together by tying the Woolly Bugger to a 3X tippet and then attaching the nymph to 18 inches of 5X leader material tied to the bend of the streamer’s hook. Trout rising to a midge hatch or slashing at baitfish near the surface will dictate a change, but otherwise stick with the tried and true.

SPINFISH STRUCTURE
Although pond trout are feeding in April, they’re not as aggressive as they will be in May and June. So in-line spinners such as small 1/8- to 1/32-ounce Mepps or Panther Martins are better choices than heavy spoons because they can be retrieved more slowly without running too deeply. The same is true of similar-size marabou or soft-plastic jigs. Black, white, or earth-tone jigs about 2 inches long, including dressing, can work well. Be alert; trout often hit these on the drop after the jig has been twitched a few times.

Pay attention to shoreline structure. Visible points of land will extend below the surface and may hold large numbers of trout. The mouth of any tributary stream is also a logical target, as is the underwater delta usually formed where any flowing water enters a pond. Such deltas are generally shallow flats spreading fanlike from a tributary mouth, often with a deeper center channel and an abrupt dropoff around the perimeter. You probably can’t see this from shore, but keep the apparent underwater topography in mind and fish accordingly.

Finally, use light line. Four-pound-test is perfect and will provide good casting distance with light lures. Tie your spinners or jigs directly to the line; trout will shy from snap-swivels.

BAITFISH FOR CRUISING TROUT
I almost hate to say this, being a flyfisherman at heart, but you can do extremely well with Berkley Trout Bait. It often works even better than the traditional worm in early-season ponds.

Rig a single pellet of Trout Bait on a size 10 or 12 hook, put one small split shot on your line 12 inches above the bait, then cast to water a few feet deep 15 or 20 feet from shore.

Now, wait. Trout Bait floats, which means the pellet will be suspended above your tiny sinker and in plain view of fish cruising the shoreline. A worm, in contrast, will sink to the bottom and be harder for trout to find. This is a deadly tactic, especially for recently stocked hatchery fish.