An old-time float trip is still a boatload of fun 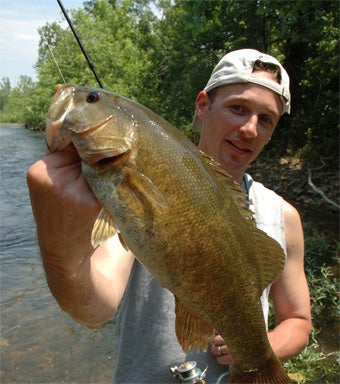 Up on crooked creek in Arkansas, the smallmouth bass really do bite all day long. At night, whip-poor-wills call hauntingly across the Ozark hills. And at the gentle edge of evening between the two, you might also hear hissing sounds as Crazy Mike slaps some steaks on a streamside charcoal fire. Those sizzles signal the end of a perfect day of float fishing for smallmouths.

This is a unique American tradition. In the years shortly before and after World War II, guides in long, wooden johnboats ferried angling sports on rivers such as the White in Missouri and Arkansas. Overnight bass trips included elaborate evening meals and nights spent in big canvas wall tents hauled downriver in specialized commissary boats. When power dams started to appear in the 1950s, much of the traditional smallmouth fishing disappeared, replaced by largemouth bass reservoirs and trout tailwaters. There is still a lot of fabulous river fishing for smallies, though, and it can be found everywhere from Maine to Oregon. I came to Arkansas looking for river bass like a sinner starved for old-time religion.

“Crazy” Mike Neher (crazy for fishing but otherwise quite sane) is an Arkansas native grown up in the Ozark bass folkways, guiding and outfitting since he was a kid (870-453-8502; crazymikefishing.com). In the past, we had caught trout together on the White River tail¿¿water, where he often fishes. This time I pestered him into a Crooked Creek float. When I got to Mike’s place in Flippin, Ark., we quickly loaded up his pickup truck and headed for the water. What I got in addition to a great time was a lesson in just how simple river smallmouth fishing can be. [pagebreak] Tempting Tubes
River bass feed primarily on crayfish and small baitfish, so a key is using a lure that imitates one or the other. Neher rigged my light spinning outfit with a dull-mustard, 3-inch soft-plastic tube on a 1⁄8-ounce leadhead jig. The secret, he explained, was to not really do anything, meaning I should just let the jig dead drift and tick bottom in the current. This makes the lure resemble a bottom-dwelling crayfish that has lost its grip and is being swept downstream.

Neher would hold our johnboat at the edges of deep chutes and the fast-water heads of pools where I’d cast the weighted tube quartering upstream, giving it time to sink. Reeling in just enough slack line to keep contact with the jig, I’d follow the drift by moving the rod downstream while feeling the lure bouncing on bottom rocks and debris. Time after time, a bounce would suddenly become a tug. Setting the hook was easy because I already had the slack line situation under tight control, and one chunky smallmouth after another would go cartwheeling and splashing into the sunlight, sending sprays of river water in all directions.

This fast-water technique works best when the jig is drifted along current seams or allowed to swing under logjams and around boulders. Reading the currents and getting good drifts are critical to success. [pagebreak] Flashy flukes
Each rapid-water run ended in a long, quiet pool that called for a different approach. In such spots, one bank tends to hold more fish than the other, usually the deeper side where the sluggish current meanders along a ledge or rocky shoreline. If that side is shaded, it’s even more promising; fallen trees or logs can also offer the sort of structure that bass prefer.

For this kind of water, we went to minnow-imitating soft-plastic jerkbaits, which have greater acÂ¿Â¿tion in slower water than tube jigs do. They produced strikes even at times when the bass weren’t being Â¿Â¿aggressive.

Smaller proved to be better. I fished 4-inch Zoom Flukes while Neher tossed 51⁄4-inch versions. The bass preferred the shorter ones by about 2 to 1, even when both were cast to the same places and fished the samme way. Any minnow-imitating color seemed to work, such as Arkansas shiner. The baits were Texas-rigged on 2/0 wide-gap hooks with no additional weight. As such, they were relatively weedless and easy to twitch free of the bushes whenever one of us made an errant cast.

Fishing was a matter of tossing the jerkbait as close as possible to likely structure along the bank, then sharply twitching the rod tip to bring the lure to life. The Fluke would dart, dive, and then drift briefly in the slow current, where we could see the flash of a bass as it rose to strike.

Hundreds of different lures can be used effectively for river bass, from small spinnerbaits to crankbaits to topwaters. But just two-Flukes and tubes-can cover almost all the bases from deep to shallow in fast or slow water. And it’s a really inexpensive combination. You can buy one pack of each soft bait, plus hooks and jigheads, for less than $10.

Having two spinning rods in the boat (one rigged with a tube, the other with a Fluke) made switching between fast- and slow-water routines easy as we floated through the afternoon. There had been dozens of bass, from frequent Â¿Â¿10-inchers to a fat 4-pounder that took a tube in the deep darkness below a Â¿Â¿current-swept stump.

In the long shadows of early evening, I kicked back in a lawn chair on a gravel bar. Then, with some of Kentucky’s finest in an old tin cup, I raised a grateful toast to Crazy Mike as he started supper.