Load Up on Prespawn Crappies With a Double-Jig Rig

Many crappie anglers fish with a two-jig crappie rig, with one jig 18 inches above the other 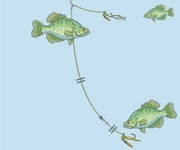 Many crappie anglers fish two jigs on the same line, with one jig 18 inches above the other. This produces doubles and lets you fish different depths at the same time, increasing your odds for putting a jig in a crappie’s face.

The basic double-jig crappie rig works great when crappies school at a specific depth, but when the fish suspend in deep water before moving into shallow spawning areas, they spread out vertically. Alabama guide and champion crappie tournament angler Sonny Sipes (205-919-0982) mops up on these widely distributed fish by rigging long trolling rods with a Road Runner spinner jig 10 feet above another Road Runner.

How It’s Rigged
Sipes threads his main line—10-pound Vicious LoVis Green Panfish line—through a small free-sliding slip bobber and ties it to a three-way swivel. He adds a 12-inch leader and a 1⁄8-ounce Natural Science Road Runner (A) to one swivel. “Basic colors like white, chartreuse, red, and blue work on about any lake,” Sipes says.

Sipes usually dresses that Road Runner’s hook with a shiner minnow no longer than 1 inch. “The smaller the minnow, the better. A big minnow chokes the hook and prevents hookups.”

An 8-foot drop line is tied to the last swivel eye. Sipes runs the drop line through a 1-ounce egg sinker and connects it to a No. 10 two-way swivel. A 2-foot leader extends from the swivel and sports another 1⁄8-ounce Natural Science Road Runner (B). This one is dressed with a tube or Southern Pro 2-inch Crappie Stinger.

How It’s Fished
Sipes fishes his crappie rigs on as many as eight 14- or 16-foot trolling rods (C). (Check regulations for rod limits.) Holders spread the rods in a semicircle in front of the boat—a ploy known as spider rigging. Side-by-side fishing chairs allow Sipes and another angler to tend the rods while moving the boat forward with a bow-mounted motor at .5 to 1 mph.

Prespawn crappies typically suspend 15 feet deep or deeper over a creek or river channel. A prime staging area for them is a creek channel near the mouth of a creek arm. If the fish are 18 feet down, he lets out enough line to keep the Road Runners swimming along at that level. The slip bobbers float on the water’s surface. They don’t go under when a crappie bites, but they still serve as strike indicators. “Whenever one bobber does anything different from the others,” Sipes says, “set the hook fast.”