The bane of any bluegill expedition is not finding the fish, it’s avoiding the rat-a-tat-tat of the juveniles and locating... 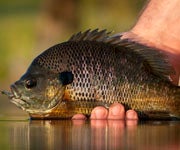 The bane of any bluegill expedition is not finding the fish, it’s avoiding the rat-a-tat-tat of the juveniles and locating the adults–or at least ones large enough to fillet without risking the loss of a digit. A 2002 study by the American Fisheries Society suggested that larger bluegills have a different approach to feeding than smaller specimens, which premise their own predation on an understandable determination to avoid becoming prey themselves.

Larger bluegills, studied in an admittedly turbid lake, gathered in the open areas near offshore weeds–areas that were rich with the zooplankton and benthic macroinvertebrates that keep bluegills fat and sassy. The study conceded that the lake’s high turbidity might have emboldened the adult bluegills, but the point remains that they fed in these open areas throughout the day, pike and tiger muskies be damned.

The takeaway for anglers? If smaller bluegills drive you nuts, move away from shore and try the open-water breaks in the weeds. Any bluegills you run into out here will likely be a good size. To catch them, fish your bait or jig slowly and enticingly. In other words, think gamefish for location and _panfis_h for method.