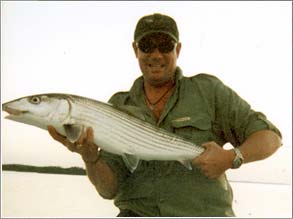 YUCATAN COAST: Inshore Eden
White sand beaches stretch for mile after unspoiled mile here, where soft breezes whisper through coconut palms and gently ripple the surface of bonefish flats extending to the horizon. For both numbers and variety of fish, this region is arguably the world’s premier light-tackle fishing destination and also one of the most lightly fished.

Bonefish, permit, tarpon, barracuda, and snook are abundant in coastal lagoons and bays extending roughly from Boca Paila (about 75 miles south of Cancun) south to the Belizean border. From north to south, Boca Paila, Ascencion Bay, and Espiritu Santo Bay are the hotspots, served by a variety of lodges with easy access from the United States via Cancun.

Permit and bonefish run small to medium in size, although double-digit fish are possible. The emphasis, though, is on numbers-say, 20 bonefish from 2 to 5 pounds before lunch. Snook here are sleepers, often ignored by flats anglers targeting bonefish. But the backs of many bays and lagoons are dotted with hundreds of small mangrove islands; sight-fishing for snook basking in the sunlight shallows near the mangroves is often possible.

Best months are April, May, June, September, and October, although fall weather is less predictable. Lodges like Boca Paila, Casa Blanca, and Playa Blanca are served by numerous U.S. sporting-travel agents, such as Frontiers (800-245-1950; www.frontierstravel.com) and Angler Adventures (800-628-1447; www.angleradventures.com).