F&S Classics: Death in the Moonlight

One man's harrowing encounter with a white shark brings him close to death. 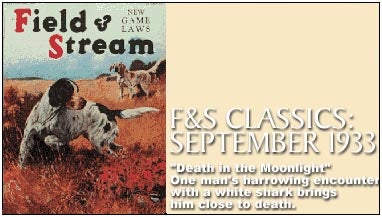 If at night you happen to be standing up to your shoulders in saltwater, when the wind is still and the tide is tranquil, in a creek not far from the ocean, and you suddenly feel a strange warm wave softly climb your neck and fondle your throat, all I have to say is, look out! I was so standing one moonlight night when just such a ghastly wave began to get intimate with me. Then terrible things happened, there in the murky water and the misty moonshine. A monster of the deep tried to do me to death–that’s what happened. To this day I carry the physical scars of that encounter; and there’s a scar on my mind too, a mute testimonial of my ordeal on that dread night.

My older brother and I have gone fishing down much of Ramshorn Creek. It was not sport with us, but a business. For several years we literally fished for a living. At night we used the gill-seine profitably in the mouths of creeks on the young flood-tide. After setting the net entirely across the mouth of the creek, we would divide forces. I usually stayed by the seine and took out the mullets, whiting, school bass, and other table fish as they gilled themselves. My brother took an oar and wandered up the edges of the creek, striking the water and otherwise disturbing the fish so that they would make a break down the estuary for the bay.

It was so on this night. I went into the water with no premonition of trouble. It was routine, and I had long been used to it. My raiment consisted of an old pair of trousers.

Deep night lay over the wide Carolina marshes, the mazy creeks that meandered lazily through them, the dim hummocks, the purple wall of the pinewood that marked the line of the mainland to westward. Far off could faintly be heard the soft roar of the surf falling sleepily on the drowsy shores of Cape Romain. Moonlight silvered the scene, touching with tender radiance that frayed reeds, the glimmering oyster-banks, the gleaming tide. But the light was not brilliant; a lacy mist lay here and there over the dim waters and the marsh.

I could hear all the night noises, with which I had so long since been familiar: the rush of a school of fish in the shallow waters on the edge when a porpoise got after them; the melancholy grunting croak of the great blue heron; the mellow fluting of the willets; the weird intoning of a great horned owl from the dense red cedars on a lonely hummock. These sounds might make an amateur uneasy; but I was used to them all, and it was with our customary unconcern that my brother and I staked one end of our seine at the north side of Ramshorn Creek, and then, paying out the net as we rowed across the mouth, staked the other end at the south side. We had the long, winding estuary closed off. The boat we tied just outside the net, so that I could conveniently throw the fish in as they were gilled.

There was a lot of phosphorescence in the water that night, and I could distinctly see the pale fiery outlines of some fish as they struck. But I did not enter the water until several energetic captives had begun to make it foam wildly near the surface. By this time my brother was two hundred yards up the creek, shouting and spanking the water with his oar to frighten the fish down.

When I thought we had about a dozen mullets and sea-trout gilled, I waded into the warm water to begin taking them out. The water at its deepest part took me about the shoulders. I worked my way to the far side of the net and was almost halfway back across, with the water up to my breast, when suddenly it happened. At that time I had my arms raised above my head, a big fish in each hand, just ready to heave them into the boat tied nearby.

Before this sinister stranger struck me, and just as I threw the poised fish, I was dimly aware of a monstrous show of phosphorescence and of a diabolical shape almost beside me. The next second the Thing massively brusd my left leg between the knee and thigh, and instantly the saltwater burned me like fire. When I ran my hand down in the water to see what had happened, I found that my trouser leg had been rasped away where this malignant phantom had bruised me, and that my leg was raw and bleeding.

At the same moment came the goulish warm wave fondling my throat. In that creek mouth, there in the moonlight, with my brother far away, Death was upon me. I knew it. I felt it.

I was at close quarters with a white shark of huge proportions. He had drawn blood by rushing against me; his hide, as rough as sandpaper, had frayed both my clothing and my flesh. I looked wildly about and tried to discern in the water the position of this ruthless terror of the deep. I did not know which way to run. And all the while the placid moonlight slept on the world, and the willets fluted, and the faint echo of my brother’s voice came to me from half a mile away.

As you can imagine, in my direful plight, all that I knew of the character and behavior of the white shark, a dread visitor from the West Indies into our waters, suddenly rushed over me. George Eagan had been killed by a shark in Bull’s Bay. I had seen his body, and I was sorry I had. In Wappoo Cut, Captain Fritz had been savagely mauled by one of these monsters, and had barely escaped with his life. By one of these prodigious brutes Charlie Deas had been killed in the surf at Sandy Point, within sight of a dozen horrified bathers. And my own boyhood chum, Olaf Svensen, son of the keeper of Romain light, had met the same fate in Romain Inlet–not half a mile from where I now stood–literally in the jaws of death.

While every man is entitled to his own opinion, I believe that a fifteen-foot white shark, on a blood trail at night, is about as fatal a creature as a man will ever encounter–especially since, in the water, a man is really out of his element. People need not talk to me about sharks being harmless. I have seen men dead by their killing. And I have had one of these burly ruffians after me.

In the midst of my wild thoughts, another wave washed me– this time going almost over my head. I plunged blindly for the shore, pulling on the seine to help me through the mud and water. While thus blundering madly toward the bank, and while I was thrusting my arms forward at full length to grip the seine to steady me and for a purchase to pull, I thrust my left hand up to the wrist full into the open mouth of the shark, now headed straight for me.

Whether he meant to seize me bodily or had his mouth partly open on account of his lust for the blood scent in the water, I do not know. But I know that I felt his cold hard lips and the serried ranks of his fearful teeth. I jerked my hand back and floundered madly for shore, his huge bulk knocked me heavily against the seine as I passed him. I was on the slope now, but the mud and water were deep, and at every instant I expected the barbarian to make his final rush and drag me down. What chance had I, or would any man have, against such an awful brute?

God knows why, but it never happened. I got out safely, and lay there on the bank in the mocking moonlight. My leg was stiff and sore; my side ached. When I looked down at my left hand, it was streaming blood. I found out after I got home that I had fourteen deep gashes in it–weird crisscross cuts and slashes from those razors in the monster’s mouth. I tried to stand up and call my brother, but my voice failed me. I looked down at the seine, and suddenly saw both sustaining poles collapse violently in the water.

As the tide was flowing in, our commotion in the creek had not disturbed the waters of the bay, which shone tranquil and still. Through them now, as I gazed fascinated, I saw this murderous chimera, blazing in the lurid phosphorescence as if he were aflame, heading slowly seaward–an irresistible primal thing, cruel and cold, powerful, treacherous, goulash. Ghostly and pale in the haunting moonlight I saw his tall white dorsal fin cleave the water–like the periscope of some tremendous submarine about to deal death to its victim. I shivered as I watched the ponderous destroyer fade from sight. But for the mercy of God I might have been in those jaws, dead in the moonlit waters.

Whenever we went home, we hung up our net to dry. My brother did that work this night. The next morning I saw him standing by the seine, shaking his head as if to rid himself of an evil thought. As I came up he pointed to the net. Straight through the middle of it was a huge ragged hole. When we measured it, we found it to be 2 feet 9 inches in diameter.

Although this incident happened thirty-five years ago, my scars, as I have said, are still with me, and with me still is the vivid memory of that dreadful placid night when Death stalked me in the moonlight.

seaward–an irresistible primal thing, cruel and cold, powerful, treacherous, goulash. Ghostly and pale in the haunting moonlight I saw his tall white dorsal fin cleave the water–like the periscope of some tremendous submarine about to deal death to its victim. I shivered as I watched the ponderous destroyer fade from sight. But for the mercy of God I might have been in those jaws, dead in the moonlit waters.

Whenever we went home, we hung up our net to dry. My brother did that work this night. The next morning I saw him standing by the seine, shaking his head as if to rid himself of an evil thought. As I came up he pointed to the net. Straight through the middle of it was a huge ragged hole. When we measured it, we found it to be 2 feet 9 inches in diameter.

Although this incident happened thirty-five years ago, my scars, as I have said, are still with me, and with me still is the vivid memory of that dreadful placid night when Death stalked me in the moonlight.