During the fall migration the best action comes after dark. 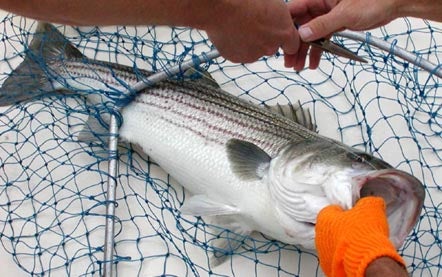 The hunt is on. Millions of East Coast striped bass are migrating south through late September and October with millions of anglers hot on their tails. Just as fall brings a frenzy of fish, it inevitably brings a frenzy of questions about where to go and what to use. You don’t need a boat or a beach buggy or even much money to get in on this world-class action, just some basic information and a good alarm clock to ring before dawn.

**THE RIGHT STUFF **
Some coastal stripers can be caught with anything from freshwater bass tackle to trout-size fly gear, but the best all-around surf outfit will be heavier to better handle both larger lures and bigger fish. You don’t have to max out your credit card, though, especially to start. A 9-foot surf-spinning rod rated for 3/4- to 3-ounce lures is basic; Daiwa Sealine-X or Tica models are good at the low end for around $60. Match the rod with a reel like the Penn 5500SS (about $85) or a Daiwa Black Gold 20 (about $80).

Lure selection is likewise simple, but you need to cover the bases: swimming plugs, popping plugs, heavy metal, and jigs. There are lots of good swimmers, but the 1-ounce Bomber Long A and A-Salt are perhaps the most widely used. Poppers are usually daytime surface plugs. Again, there are lots of options, but a 2-ounce, chrome-finish Creek Chub Striper Strike is basic. Heavy metal means dense, aerodynamic spoons that give the longest possible casting distance, and my personal favorite is a 2-ounce Acme Kastmaster. You’ll also need a few jigs (deer-hair-dressed and commonly called bucktails), which allow fishing at the greatest range of depths. A strip of white or red pork rind is traditionally added to bucktails for extra action, but white twister-tail soft-plastic grubs in 3- and 4-inch sizes do the same thing more easily.

TIMES AND PLACES
Fall-migrating bass tend to follow the ocean-edge surf from Maine to Hatteras, although not always in the surf itself, which means the easternmost extremities of land usually fish better than the bays and estuaries that held fish through the spring and summer. Places like Cape Cod, Massachusetts; Montauk, New York; and New Jersey’s barrier islands south to Cape May are all traditional fall hotspots for that reason. Keep in mind that the migration is not an all-or-nothing wave of fish but rather a loose kind of drifting movement as schools of bass gradually swim southward over a period of weeks.

Old-time sharpies decide when and where to fish by taking into account wind direction, tides, weather, moon phases, and baitfish schools, plus a sixth sense for where the bass are. Newcomers can use a simpler formula that works almost as well. Note these two things: In almost all potential fishing spots, high tide is better than low tide. Also, dawn and dusk are usually better than the middle of the day.

A high tide at or close to dawn is the perfect time almost anywhere in striper country, and it’s easy to find the right fishing days with a tide chart. The interval from about two hours before high tide until two hours after is generally prime; this occurs near dawn on about 10 days out of every month. In September and October on the East Coast, you’ll want to fish your favorite beach or jetty on those days from about 4 a.m. until 8 a.m.

Schools of bass may blitz a beach day or night, but the dark hours produce more and larger fish. The blackest nights surround the new moon-October 13 this year-which is when the biggest fish are most common in shallow surf zones. High tide on that date is at midnight on my favorite Cape Cod beach, which is where I’ll be while hoping the wind is in my face to better push schools of baitfish into the wash. Some heavy cloud cover and spitting rain would be good, too, not so much to help the fishing as to cut out the competition. If you see me at all, you’ll see only a shadow, casting with the rhythm of the surf and ready for the electrifying yank that spells striper.