Best of the Bahamas 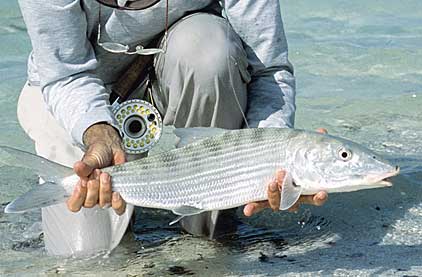 The bahamas are to bonefishing what Montana is to trout. There are other good places to catch such fish, but each has the best of its genre-and not just in size and numbers of fish. As Montana’s big sky, rugged mountains, and fertile waters all set the standard for trout fishing, so does the experience of Bahamian bonefishing define the sport, from the rich pastels of the landscape to the soft accents spoken by local guides to the white sand along shallow flats that stretch to the horizon. It is all pure magic.

It’s also closer than you think. Bimini, the westernmost Bahamian island, is a scant 50 miles east of Palm Beach, Florida. The rest of the island chain stretches roughly 400 miles farther south and east to Great Inagua. Within that Caribbean realm are two Bahamas. The first and best known is driven by casino glitz and cruise ships centering around cities such as Nassau and Freeport. The best and lesser known are the Out Islands, places where tourism is less obnoxious, where the bonefish is king, and where you can still find glistening beaches without human tracks.

The Skinny on Fishing
There are two differences between bonefishing here and in Florida. First, many South Florida flats are soft-bottomed and difficult to wade. Most Bahamian flats, on the other hand, are hard-bottomed and afford easy wading. Second, Florida bonefish are intensely pressured, which means wary, skittish, and fussy fish. Many areas of the Bahamas are less pressured and have stupider bonefish that are easier to catch. Not that Bahamian fish are pushovers, but some of them can be.

The cost of guided fishing in both areas is about $300 to $400 per day for a guide and a high-end bonefish skiff. The days when you could find an old-time Bahamian guide with an accent thicker than the hull on his ancient wooden skiff are just about over. So are the old bargain rates. I do miss the old guys with whom I fished almost 30 years ago, but the new kids are awfully good at what they do.

Unless you’re a well-traveled Bahamas veteran, there are two rules to follow. First, go to a well-established lodge. Second, use a reputable U.S. sporting-travel agency to make your bookings. Some bonefishing operations seem to come and go with the seasons because, to many Bahamians, the lodge business looks like a deceptively easy buck. You’re not going to know ahead of time which owner just got divorced, which one just put his operation up for sale, or from which lodge the manager just left in a huff, to give a few examples of problems I’ve encountered. Good sporting-travel agencies (see sidebar) keep tabs on these things and will steer you clear of them.

Getting There
You also need to know that air travel to, from, and within the Bahamas can be problematic. With the right airlines and flight schedules, travel can be an economical breeze. Unfortunately, things aren’t always right. BahamasAir, the national airline, has numerous flights to and from the U.S. mainland and among the Out Islands. Their staff has always been nice, but the airline has the worst adherence to schedules I’ve ever encountered.

Nassau is the airline hub to the Out Islands, and dozens of flights from the United States arrive there daily. No matter where you’re coming from, it’s easier to go through Fort Lauderdale or West Palm Beach, Florida, than Miami. You can arrange private charters (economical for groups of four or more) to and from the Out Island of your choice from either airport. You can also fly direct via Continental/Gulfstream (continental.com) to several Out Islands and skip the hassle of changing planes in Nassau. If you do need to connect eastward from Nassau, I’ve had luck with Western Air Bahamas (westernairbahamas.com) in addition to Continental. Make sure your flight schedule conforms to your lodge booking dates, and allow a three-hour minimum layover for connections.