The crowds are gone, but outstanding angling remains in Flordia's saltwater paradise. 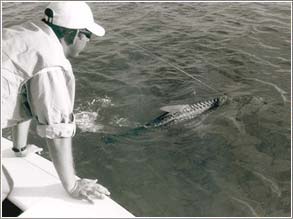 Forget the temperature. The hottest thing in the Florida Keys from July through October is the fishing. Anglers planning a trip to the Keys often don’t consider the summer because they fear the heat, but with maximum daytime temperatures averaging 86Â¿Â¿ to 89Â¿Â¿, the Keys are actually cooler than many other areas of the American South. It’s summer. It’s going to be hot most places. But most places do not have the sparse crowds, crystal-clear water, and excellent fishing that await anglers in this premier saltwater destination.

Pick a Fish, Any Fish
Summer is off-season in the Keys. Hotels and motels charge lower rates, and fishing guides are lightly booked. Winter crowds are long gone, and most of the visitors who fish the spring and early-summer tarpon season have also gone home¿¿but these anglers are missing out. Fishing is still excellent for a wide variety of saltwater species.

The bulk of big tarpon are departed on their northward migration by the end of July, but large resident tarpon can still be found with little difficulty. For anglers looking to tangle with “baby” tarpon (less than 50 pounds) on light tackle, this is their annual peak. The bonefish haven’t migrated anywhere, and summer typically produces the biggest of the species. And while you’re looking for bonefish, keep an eye out for permit; it seems the warmer the water, the better for these huge members of the pompano family.

In Florida Bay, hordes of 5- to 10-pound redfish invade the flats. Seatrout swarm the bay’s numerous “lakes.” Offshore reefs produce great bottom fishing for grouper and snapper. In blue water, sailfish aren’t as plentiful as during the winter months, but blue marlin numbers are at their highest. And big dorado (dolphinfish), as well as lesser members of the tuna family, can almost always be found along the offshore weedlines.

Where to Go, and What You’ll Catch
The Florida Keys start with Key Largo just across Biscayne Bay east of Homestead on the mainland, and reach to the southwest 122 miles to Key West. Hotel and motel accommodations are abundant along U.S. Highway 1, which runs all the way to Key West. The Keys are usually described as three distinct sections: Upper Keys, Middle Keys, and Lower Keys.

The Upper Keys consists entirely of Key Largo, 33 miles long from tip to tip. The largest population center (if you can call it that) is the small town of Tavernier. Good fishing lies along the entire length of the island, with miles of bonefish and permit flatsÂ¿Â¿as well as access to reef and blue-water fishingÂ¿Â¿on the ocean side. (Locals refer to the southeastern side of the Keys as the ocean side and the opposite, facing Florida Bay, as the bay side.) Many spots along the bay side serve as entry points for trout, tarpon, and redfish fishing.

The Middle Keys begin just below Key Largo and extend for 38 miles down U.S. 1 to the west end of Vaca Key (the beginning of the Seven-Mile Bridge). The two principal towns are Islamorada, just a few miles below Key Largo, and Marathon, at the lower end of Vaca Key. The ocean-side flats and offshore fishing present the same species as Key Largo. By far the most popular access to Florida Bay is along the upper half of this stretch. The Middle Keys, especially Islamorada, are popular among vacationers who take their shopping seriously (see “Other Activities” below).

Without a doubt, the Lower Keys, from the west end of the Seven-Mile Bridge, down the final 40 miles of U.S. 1 to Key West, are subject to the lightest summer fishing pressure. Yet there is exceptional fishing for bonefish, permit, and tarpon on both sides of the highway, and this area has its own unique backcountry fishing that is entirely different from the soft grass flats of Florida Bay.

The Lower Keys’ backcountry starts around the north end of Big Pine Key and extends westward almost to Key West. Wide coraal flats bordered by deep green channels form the geology of this large area and are populated with bonefish and permit. This is probably the best section of the entire Keys to seek the elusive permit, which may exceed 35 pounds. Tarpon of all sizes hang out in the channels and around the deeper margins of many of the numerous islands that dot this waterscape. The blue water that stretches from south of Big Pine Key to Key West is also the most productive blue marlin area of the Keys.

Key West is a small city of many attractions. Accommodations at any desired level from plush hotels to basic motel rooms are readily available this time of year, and it is served by the largest U.S. airport south of Miami.

Tackle to Take
This is a light-tackle angler’s paradise. Charter boats and guides furnish all the fishing gear you’ll need, but if you go on your own there are some important basic requirements. Most flats and backcountry fishing for the middleweights (seatrout, permit, baby tarpon) calls for spinning or baitcasting gear with reels holding at least 200 yards of 6- to 12-pound-test line. Fly anglers will need 8- to 10-weight rods and lines with reels that hold 200 yards of backing. Bigger game, such as large sharks or adult tarpon, requires 15- to 20-pound-test line or 12- to 13-weight fly tackle and reels with at least 200 yards’ capacity.