The Kings of Tidewater

Ready for the fight of your life? Try chinook. 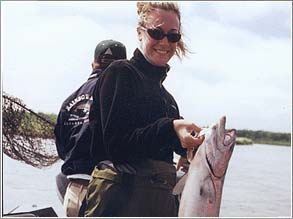 What’s the most fun you can have with light casting or fly tackle? A tough question to answer, but I don’t think it can get any better than fishing for chinook salmon in tidewater. Chinooks, also known as king salmon, will yank the line off a reel like a runaway truck. They pull and fight like wild bulls and never really give up. When you hook one of these saltwater-strong salmon weighing 30 pounds or more, you’ve got a fight on your hands as exciting as with tarpon or sailfish.

In addition to their strength, the wary, cagey nature of these fish makes them a challenge to catch. A certain amount of trepidation goes with leaving the comfort of a big, deep ocean to enter a much shallower and smaller bay, estuary, or river mouth, and chinooks are nervously poised for instant flight the second something looks or feels wrong. Some of the larger fish often enter and leave their natal streams several times before finally heading upriver. That’s why many chinooks over 40 pounds start to develop rosy undersides before they leave saltwater forever, but this in no way diminishes their fighting ability or edibility. This is a truly unique fishery made just to order for the light-tackle angler.

Low in the Flow
In some cases you may actually see the fish you cast to, but more often it is a pon-derous roll on the surface that alerts you to their presence¿¿if they show at all. Here, instead of trolling blindly in deep water, you get your hookups often at depths of less than 15 feet.

Chinooks tend to hang out close to the bottom, where they can expend less effort while stemming the tide. The stronger the current, the more tenaciously they hang near the bottom. But when the tide creates a slack current situation, chinooks will often range higher in the water column. Understanding this behavior pattern is the key to success.

It is also critical to be in the right place at the right time. Chinooks enter the northernmost rivers in their range later in the summer, and the run is also shorter. On Alaska’s Bering Sea streams, for example, the run lasts a month or slightly less and occurs from late June through mid-July. The southernmost rivers in their range enjoy a longer season, and some even have a second run in the fall. For example, the Sacramento River in California is perhaps the southernmost U.S. river with a major chinook run. Some of these fish are there all year, and while the spring season (April through June) is currently closed for conservation reasons, the summerÂ¿Â¿Â¿fall run (July through November) is very productive.

Pulling the Plug
While it is widely known that salmon eggs are deadly as bait, many anglers are discovering that lures are extremely effective as well. Chinooks entering estuaries and tidal river mouths are surprisingly aggressive if shown something they like, and almost any diving lure that goes deep quickly and makes noise will get their attention. I’ve caught many big chinooks on 3- to 4-inch rattling plugs with large lips, such as the Wiggle Wart series by Storm Lures. Popular colors include blue and silver, purple and silver, green and silver, and orange. Many anglers using these plugs remove both treble hooks and attach only a single large hook (e.g., a 3/0 to 5/0 Siwash) on a swivel from the front hanger via a split ring. I’m convinced this modification hooks more fish. Trolling under power or casting and retrieving with a fast, steady crank of the reel gets hookups in slow or slack water, but if there’s a strong current, it is more effective to anchor the boat and “troll” that way.

Jigs also work very well if they’re heavy enough to reach the bottom in the current; I like jigs that weigh 1 to 11*2 ounces. White will get strikes, but I think bright pink, orange, and purple work a lot better. Bounce them actively through the area where the fish are holding. When anchored in strong current, drop the jig back with the reeel in freespool until it just reaches bottom, then jig it up and down.

In shallow water (i.e., 10 feet or less), jigs can also be fished effectively with a sliding bobber. Use a small plastic bead above the bobber and a movable nail knot made with a separate piece of 15- to 20-pound-test monofilament tied around the fishing line to set the depth. This knot goes through the guides easily but not through the bead, and that stops the bobber right where you want it. Every bounce of the bobber on even the smallest waves gives the jig enticing action.

These are very powerful fish, so your spinning or baitcasting reel should have at least 200 yards of 12- to 20-pound-test line and a reliable drag.