Convince a buck that you're his competition, and he'll come running 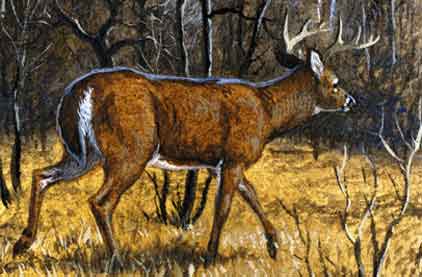 As the peak rut nears, bucks stake out breeding territory by establishing primary scrapes, which advertise their availability to does and send a warning to other bucks against territorial infringement. Any sign of intrusion by another buck will be met with aggression, which is why so many hunters carry grunt calls. Used properly, they can draw the attention of a territorially minded buck.

But a grunt call alone can merely put a cautious buck downwind of you, where he’ll try to smell what he hears. So take this strategy a step further by using scents to confirm his suspicions and bring him running for a fight.

Below, Don Bell, an expert whitetail hunter and the founder of Code Blue Scents, shares his advice for setting up a realistic scenario of an intruding buck.

1] Neutralize human scent. “You’re trying to lure a deer from downwind, so minimizing your scent is essential,” says Bell. Use masking detergent, shampoo, and soap before the hunt, then spray your boots with an odor suppressant after leaving your truck.

2] Lay a scent trail. Drag scented rags upwind to the scrape you’ve scouted. Bell uses coon or fox cover scent for the first 50 yards to discourage a buck from heading in the wrong direction. Then he switches to a double dragline to mimic a buck trailing a doe: On a short line, he pulls Code Blue’s Whitetail Doe Estrous; and on a longer one, buck urine. “When you’re done, hang the rags and a tarsal gland waist-high and pour doe and buck urine into the scrape,” he says.

3] Hang your stand. Choose a location that allows clear shooting on a buck approaching straight into the wind or quartering. Picture the scrape as the middle of a clock and place the stand at six o’clock, which will provide a good shooting angle on a buck approaching anywhere from three to nine o’clock. “By the time a buck gets within 20 yards of the scrape, he’ll be able to see that there are no deer around,” Bell says. “So your stand should offer good angles on the periphery of this 20-yard arc.”

4] Sound the alarm. Blow your grunt call to simulate the sound of an intruding buck tending a doe. It’s usually best to start out conservatively by mixing soft grunts with periods of silence. If that doesn’t work, however, pick up both the volume and the frequency of your calls. Be patient and be ready. It takes some time for a buck to circle downwind, Bell says, but once he picks up the scent of what he thinks is an intruding buck, he can charge in very quickly.

**5] **Rinse and repeat. According to Bell, your best chance to kill a buck is on the first try, so don’t put up your stand until the day of the hunt. If you don’t fill your tag the first day, however, leave your stand hanging. Reseal the tarsal gland in an airtight container and pack it out. Also, bring home your drag rags and either wash them or throw them away and have some new ones handy. “The first hunt may be your best chance,” Bell says, “but it’s certainly not your only. So try again tomorrow.”