You’re not after just any trout. You want “the one,” the biggest brown in the river. Here are three ways... 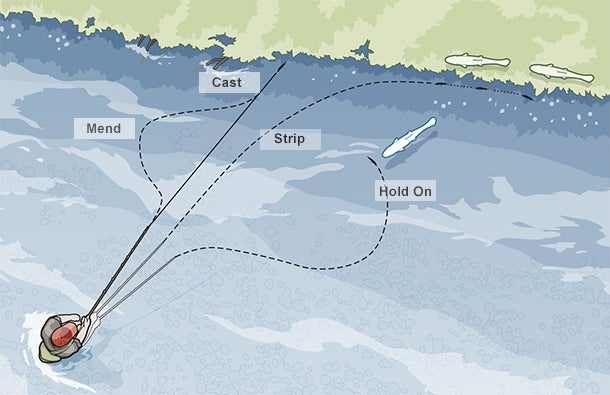 You’re not after just any trout. You want “the one,” the biggest brown in the river. Here are three ways to get him.

Creep and Sweep (above)
Giant streamers shine for big browns holding tight to the bank. Situate yourself 25 to 35 feet off the far side, and cast directly across-stream tight to the edge. As soon as the fly lands, make a couple of big upstream mends. Once the fly has had time to sink, make three or four hard, fast strips. This gets the fly working upstream tight to the bank for a few beats before it swings out into the main flow–and it’s often right at this turn that a big trout smokes the bug. If not, take 10 steps downstream and repeat the process until you’ve worked the whole bank.

Splash and Dash
In pocket water, you’re apt to be dropping the fly behind a boulder only 10 feet away, and the zone may be so short you don’t have time to strip. So just pull 15 feet or so of line off the reel and make short roll casts to the sweet spots. As soon as your fly smacks down, give it a few fast twitches with your rod arm. You’re trying to mimic prey that is suddenly in the wrong place at the wrong time and trying to get out fast. This doesn’t allow the trout much time to inspect your streamer, and the big profile makes for an easier target. A big brown may attack the second it hears the fly slap the water.

Low and Slow
Several new-age patterns, like Rich Strolis’s Head Banger, are designed to mimic sculpins and need to be fished right on the bottom. “I cast mine directly upstream with a floating line,” says Strolis, noting that a sink tip adds too much weight. “Once it gets to the bottom, I’ll strip slowly, just enough to keep contact with the fly as it moves downstream.” Working a streamer downcurrent on the bottom takes some getting used to, but Strolis says the trick lies in setting the hook on any stop or tick during the retrieve. Even big trout will just suck it up off the bottom, which can feel very subtle.