King salmon in the Great Lakes region are about to flood the tribs to spawn, which means the brown trout... 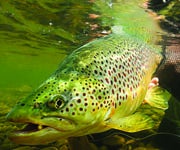 King salmon in the Great Lakes region are about to flood the tribs to spawn, which means the brown trout will be feasting on the salmon eggs. Most anglers target the kings, giving you a good shot at big browns lurking behind the salmon.

The Flies
Your egg patterns should be sizes 12 to 16, and natural colors such as peach and cream work best. Nymphs are deadly now, too. When a female king clears away gravel for the eggs, her tail kicks up a lot of the bugs in the gravel. Keep Copper Johns, Pheasant Tails, and other natural-color patterns in your box.

The Rig
In these clear, shallow streams, light tippet–5X or 6X–is essential. Small indicators will keep from spooking browns, which become increasingly skittish and finicky as fall approaches. A simple two-fly rig with a 12- to 18-inch dropper and little to no split shot should do the trick. Switch between two eggs, an egg and nymph, or two nymphs until you find the combo that works best.

The Trick
The browns should be right on the lip of or within the grooves on gravel beds. And they won’t shy away from the kings. Some will move right behind a female and start sucking down eggs as they’re released. In water this clear and shallow, the trout are easy to see–and spook. Keep a low profile and cast tightly behind the kings so your flies tumble along the gravel with the eggs. And keep moving: If the trout aren’t biting, go upstream until you find some that are.