The anatomy of an ATV accident--and how to avoid one. 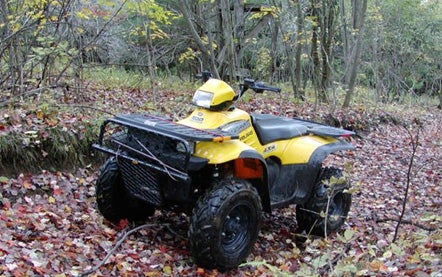 Hearing a shot on the far side of our property late one night a few years ago, I jumped on an ATV and raced toward the sound. It was days before deer season, and because the shot might have been from a poacher, I wanted to get out there as soon as possible. In my haste I didn’t bother to put on a helmet, and I kept the lights off so as not to give away my position. Halfway there, my right front wheel ran into a stump.

One of the biggest ATVs on the market turned end over end, tossing me into the air. I did a complete flip and landed flat on my back. When I came to, I knew I was hurt. I crawled to the ATV, which luckily had landed upright and was relatively undamaged. The 2-mile ride back to the house was extremely painful. I recovered, but I had to spend about four months sleeping in a chair due to a separated shoulder and fractured, loosened ribs.

ATVs are rapidly growing in popularity, with an increasing number sold every year. They’ve also become bigger and more powerful-several models now have engine displacement up to 700cc-and capable of extremely high speeds. As a result, ATV accidents have also increased greatly. According to figures from the Consumer Product Safety Commission, there were 113,900 emergency room visits related to ATV use in the United States in 2002, an increase of nearly 68 percent from 1987 when there were 67,800 accidents. In the 20-year period from 1982 to 2002, the CPSC had reports of 5,239 ATV-related deaths.

Although better driver education in the past few years has resulted in a lower overall accident rate, drivers are still getting injured or killed. Most accidents are caused by the following factors, all of which are preventable.

1. Underage riders
Of all children in ATV accidents, 95 percent were riding adult-size vehicles. Children younger than 16 do not have the strength, size, motor skills, or coordination to drive the larger vehicles.

**3. Not wearing safety equipment **
Almost 80 percent of ATV accident patients treated at St. John’s Emergency Trauma Center in Springfield, Missouri, were not wearing helmets at the time of the accident; almost half of those sustained head injuries. A recent study by St. John’s showed that helmets could reduce the risk of fatal head injuries by 42 percent and of nonfatal head injuries by 64 percent. Over-the-ankle leather boots, long-sleeve shirts, and gloves should also be worn.

4. Riding too fast or carelessly
As I learned, this can cause an ATV to tip or flip over, throwing you off of the vehicle or pinning you underneath it. Riders who put their feet to the outside of the footboards, in the mistaken belief that doing so will improve balance, could get a foot caught on an obstruction or even between the footboard and the rear tire. Driving with one hand is another mistake. If you hit an obstacle, the handlebars can easily snap away, causing you to lose control.

Remember that no amount of ATV riding experience is a substitute for safe driving. My negligence caused a serious accident, and it could have been worse. That’s what I think about every time I strap on a helmet.