More and more urban miscreants are riding their ATV’s in the city, like the guy above on a Philadelphia street.... 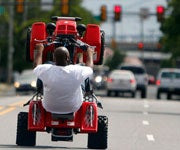 More and more urban miscreants are riding their ATV’s in the city, like the guy above on a Philadelphia street. Sure, it might be fun, but it is illegal, dangerous and gives ATV riders a bad name.

ATV riders already have a hard enough time keeping trails open because of the few bad guys who ride too fast, go off trail, don’t slow down for hikers, or have excessively loud pipes. Them being a nuisance is a surefire way to lose more designated OHV land.

“Police have a no-pursuit policy when it comes to quads and four-wheelers, meaning their only official option to get them off streets is to catch them idle, like when they fuel up at gas stations or leave or return from wherever they store the vehicles,” reports the Philadelphia Inquirer.

The City Council of Philadelphia will hold a public hearing this fall on ATV’s.

Other cities aren’t immune to illegal ATV usage on city streets. Watch this guy in Baltimore ride a wheelie down the Northern Parkway.