Train Your Pup for Gun Shots, Real Birds, and Water

Photo by Bill Buckley No amateur trainers ever set out to ruin a gun dog, but Pam Kadlec, owner of... 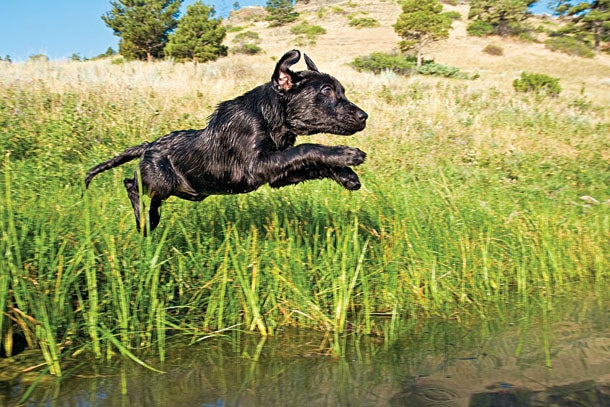 No amateur trainers ever set out to ruin a gun dog, but Pam Kadlec, owner of Just Ducky Kennels in Edgefield, S.C., knows the sound of their voices when they do. Desperate and defeated, they call on Kadlec because they’re looking to undo some damage they’ve done. Before they explain themselves, Kadlec knows it’s usually one of three problems–the dogs are either gun-shy, bird-shy, or water-shy. Here’s how to avoid all three.

1. The Big Bang
A gunshot is very loud. To get Pup ready for it, says Kadlec, you need to start making noise from the day you bring him home. When Pup is within earshot, run the vacuum or clap your hands. If Pup is unfazed, gradually increase the noise level by banging some pots while he’s eating. “If the pup reacts, don’t coddle it,” says Kadlec. When training, have a friend fire a cap pistol from 50 yards just after you toss the bumper in the air. Eventually move the gunner closer and closer.

2. Get Feathered
Nothing emulates a mouthful of feathers like the real thing. Kadlec puts a dead quail amongst her pups at six weeks. Not long after she’ll put a pup on a check cord and toss the bird a few feet. “If they tear at the feathers, put the bird in a sock.” After a while, you can go back to the real thing. Don’t rush to use live birds: Kadlec waits till her pups are 5 to 6 months old so that flapping wings don’t spook them.

3. Swimming Lessons
Kadlec takes her pups for a swim as early as eight weeks. She’ll often start by tossing a bumper to the edge of the pond. Then she’ll toss it a bit farther, and so on, until Pup is swimming. “You may not get a swim the first time, so don’t push it with too many retrieves,” says Kadlec. Instead, wade in and encourage Pup to follow. Tease and cajole him with a bumper. Never force him in, or you might get stuck with a landlubber.