What to do when bad things happen to good guns. 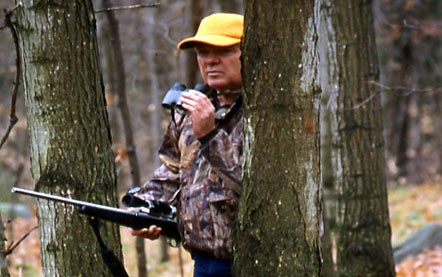 The Armed Forces of our great nation are governed by the Uniform Code of Military Justice, which specifies all the things you can’t do and what will happen to you if they catch you doing them. Back when I wore a green suit, the No. 1 offense was dropping your rifle. It ranked ahead of even treason and making fun of Lyndon Johnson’s unfortunate-looking daughters.

As a civilian and a hunter, you will not have to spend the night cleaning out the grease trap in the mess hall if you drop your rifle, but if something does happen to your firearm, it can end your hunt right then and there. And so, here are some of the most common mishaps and what you can do about them in the field.

Plugged Barrel
If you take a header in the mud or snow and plug your gun’s barrel, said gun is out of commission because it will probably explode if you fire it. Prudent hunters keep this from happening by putting a single thickness of plastic electrician’s tape or bowhunter’s camo tape over the muzzle. The tape bursts when the column of air ahead of a bullet strikes it. (In the past, I’ve been taken to task by readers who thought that I meant for them to plug the bore. But I guess that if you can’t tell over from in, blowing up your gun is the least of your problems.)

If your muzzle does get plugged, forget the old branch-down-the-barrel maneuver. There may be a suitable branch handy, or you may have to spend an hour looking for one, or there may not be one within 500 miles. Carry a takedown cleaning rod with you.

** Stuck Case**
This very same takedown cleaning rod is invaluable for removing fired shells that are stuck in the chamber. If you get a jammed case, run some oil down the barrel and let the rifle stand for a few hours. Then insert the cleaning rod and tap until the case comes free.

A live round that’s stuck in the bore presents you with a dangerous situation. Do not try to remove it yourself. What you do is: (a) Remove the bolt if it’s a bolt action, or block the bolt open if it’s a lever, pump, or auto; (b) call a gunsmith and explain the problem, making sure that he understands you’re bringing a loaded rifle into his shop; (c) take the gun to him and let him clear it.

Banged Scope
Dropped rifles seem to land unfailingly on their scopes. Did I knock this thing out of whack? You had better find out. Find an attractive knothole on a dead tree, and see if you can hit the knothole from 25 yards.

If a bullet hole appears in the knot, or within an inch of it, you can breathe a sigh of relief. If the shot is off, try the adjustments and see if you can get the shot in the knot. If your bullets wander, your scope’s adjustments are busted.

The solution is, bring a pre-sighted spare scope. It takes a cataclysmic fall to wreck your rings and bases, and while a pre-sighted scope will not put you dead on when you replace it, you’ll find that you’re on the paper at 25 yards and can zero from there.

Gummed-Up Gun Guts
Oil, mixed with burned powder and various other bits of crud, forms a sludge that can put your rifle out of business. In cold weather, the sludge forms even quicker and gets even harder. So let us assume that you have over-oiled and neglected to clean your rifle and the firing pin won’t fall, or the sear won’t work. What do you do?

Congealed crud can be loosened up or removed by the liberal application of lighter fluid, Coleman lantern fuel, gasoline, acetone, or boiling water. If you have a bolt action, dismount the scope, remove the barreled action from the stock, go outside, far from any flames, pour your solvent into a container, and let the offending machinery soak in it. Now try the action. If it’s been freed up, let it dry out and put the gun back together. If it’s still clogged, repeat the treatment. If you have a rifle other than a bolt action, removee the scope and the buttstock and proceed in the same manner.