The T3 is part Finnish, part Italian, and world class. 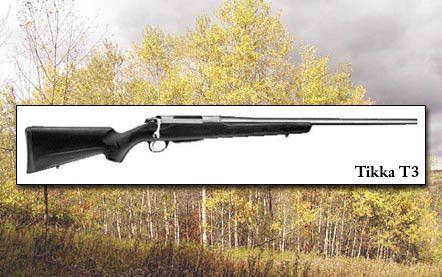 Finland is a small, heavily forested land of 6 million inhabitantsÂ¿Â¿Â¿who own 4 million guns. It is home to Nokia phones, the late composer Jean Sibelius, saunas, and a language that is impenetrable to American ears. It is also the place of origin for what may be, dollar for dollar, the finest hunting rifle in the world. Tikka (pronounced TEE-ka) is produced by Sako and imported to the United States by Beretta. The T3 is the newest model from Tikka, designed specifically for the American market. The two qualities its maker sought above all others were accuracy and light weight.

In creating the T3, Tikka called on the services of Giugiaro Design, an Italian firm whose clients include dozens of international corporate monoliths who produce everything from inline skates to automobiles. As a result, the T3 is not only sleeker than a serpent, but it has a distinctive, modern appearance that it does not share with any other rifle.

The guts of the gun, however, are strictly Finnish. The action feeds from a detachable polymer magazine that holds anywhere from three to five cartridges (T3s come in calibers from .223 to .338, with the Winchester .270 and .300 Short Magnums in the middle). As a rule, detachable magazines are as attractive as neurofibromas, or goiters, or sebaceous cysts, but this one blends into the stock so smoothly that you hardly notice it.

The receiver borrows heavily from benchrest actions. A small ejection port lends it rigidity. A coned bolt head and a 70-degree bolt lift make for cycling that is slicker than deer guts on a doorknob. The trigger can be adjusted by you, without a lawyer present, to a pull of 2 to 4 pounds. You take the barreled action out of the stock, give a small set screw a turn with an Allen wrench, and that’s it. My rifle came set at 4 pounds, and I took it down to 3.

T3s come in wood- and synthetic-stocked versions, and the latter come in blued- or all-stainless-steel models. It is this last example that I’m writing about, and it’s called the T3 Lite Stainless. It is light, too, scaling 61/4 pounds in .270 Winchester. This is thanks in part to a fiberglass-reinforced copolymer polypropylene stock and a barreled action that packs not 1 ounce of extra weight.

The barrel length in standard calibers is 221/2 inches, and in magnums, 241/2. It is not a skinny barrel, which accounts in part for this rifle’s stunning accuracy. How accurate? I shot factory ammo and handloads in 130-, 140-, and 150-grain varieties. The average group size was .880 inch; the smallest went into .330 inch-this from an out-of-the-box factory rifle that costs $630. Part of this uncanny accuracy comes from the stiff, free-floating barrel. It also stems from the way Tikka beds the rifle. On the T3, the recoil lug is permanently embedded in the stock, with just its upper edge showing, and this edge fits into a groove on the receiver. It’s a variation on pillar bedding, and it ensures that the barreled action and the stock fit together precisely. Even the scope mounting is unconventional. The receiver is not drilled and tapped for screws; rather, there is a pair of parallel grooves running along the receiver, and the “legs” of the scope rings ride in them. It’s the same system that’s used on rimfire .22 rifles. I had doubts about its strength, but it holds just fine and gives you almost unlimited latitude in spacing your rings so they can fit any scope. I can’t recall shooting another rifle that is so intelligently thought out and so nicely made, that operates so smoothly or shoots so accurately. It would be a good rifle at $1,000. At $618 to $646 (depending on caliber), it is astounding, but it is not perfect. They don’t make it left-handed.