Muzzle energy impresses humans, but it's not what kills animals. 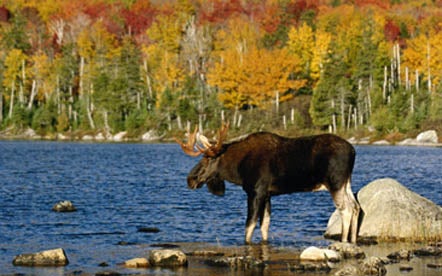 Back in the late I95Os, my illustrious predecessor Warren Page wrote an article titled “Knock Down Nothing,” in which he spilled the dirty secret that no projectile actually takes an animal off its feet-and that all the slavish attention paid to velocities, bullet weights, and foot-pounds of energy is pretty much wasted.

At the time, I was a high schooler, frying my brain in an effort to memorize all this stuff. I didn’t see how a man who had hunted all over the world and killed more animals than I had dreamed of could say such things, but as I have learned, he was dead (no pun intended) right.

** ACTUAL CASE STUDIES**
Animals drop because of damage to the brain or the spinal column, which stops signals to the legs; and die when the oxygen in their brains runs out. The bullet’s impact is not the direct cause.

Last fall, I killed two deer with a puny 6.5x55mm handload-a 125-grain bullet at 2750 fps. One fell in its tracks, and the other went one step and dropped. A week later, I killed a deer of roughly the same size with a .300 Jarrett, a cartridge similar to the ferocious .300 Weatherby, and one which shoots a 200-grain bullet at just under 3000 fps. It has exactly twice the muzzle energy of the little 6.5×55. That animal ran for perhaps 60 yards before she went down, in defiance of all that power. A few months earlier, that same rifle and load dumped a 1,500-pound Alaska moose in its tracks. But it didn’t knock the critter off its hooves.

A few years ago I killed a whitetail doe with a .270 that entered the rib cage on the left side and ranged forward to exit the right shoulder, breaking it in the process, and demolishing both lungs and the heart. The bullet almost cut the poor creature in half but did not knock it down. That doe ran for 70 yards.

Good taste constrains me from going on, because good taste is everything to me. I trust that I have made my case.

THE POINT
If you want to hunt big animals, you use a big cartridge that shoots a big bullet. Thick hides, heavy bones, and massive muscles are too much for a small bullet to get through to where it has to do its work. A big bullet will penetrate, but it doesn’t knock anything to the ground.

Similarly, high velocity is useful only because it makes hitting at long range much easier than low velocity. All those thousands of feet per second are not going to sweep any critter off its feet.

(On the other hand, hypervelocity does do some interesting things. I’ve seen tiny 50-grain bullets driven at 4000 fps from a .220 Swift penetrate iron plates that 180-grain .30-caliber game bullets couldn’t punch through.)

You may, if you wish, make this much more complicated than it really has to be, but you would be better off learning all about nuclear physics or the Big Bang theory. If I had studied my lessons instead of committing ballistics tables to memory, I might have amounted to something in life. Profit by my tragic example.