There's a new player in the ranks of premium 22s 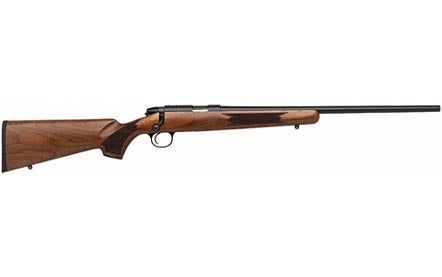 In the mid 1990s, the tooling that produced Remington’s high-grade model 541 .22 bolt-action sporter wore out, and rather than re-tool to keep the gun going, Remington decided to start from scratch. They came up with an entirely new rifle called the Model 504; it’s a sleek, distinctive-looking gun with only one piece of plastic in it-the magazine follower, which is orange so you can see when you’re out of ammo.

The 504 weighs 6 pounds even, has a checkered walnut stock, a 6-round detachable magazine (made of titanium, no less) that fits flush with the stock, and a 20-inch barrel. Remington has taken some pains with that barrel, providing it with the same type of button rifling that they use in the Model 40-XR target rifle, and a semi-match-grade chamber. A tight, consistent fit between chamber and cartridge is crucial for accuracy in rimfires, and this one provides minimum freebore while still allowing you to use just about any type of .22 ammo.

If the stock is a sensual delight, which it is, you can thank John Trull, the Remington designer in charge of the 504 project. It was not created by a machine. It was the child of Trull, and a Remington stockmaker, who would whittle a while, give the stock to Trull, and then whittle some more where Trull told him to.

Remington sees this rifle as the rimfire version of its centerfire Model 700-not only as a landmark gun in itself, but as a platform for custom rifles. To facilitate this, the 504 can easily be re-barreled by merely unlocking a couple of bolts through the receiver, sliding in a new barrel, and tightening the bolts again.

**TRIGGERNOMETRY **
The 504’s trigger comes with a 4-pound pull that can be adjusted lighter by a Remington representative and is equipped with screw adjustments for sear engagement, pull weight and overtravel. The trigger pull on my rifle was, to put it mildly, not good. It broke at 4 pounds, but it had so much creep that you could recite the _Bhagavad Gita _ in its entirety while waiting for the sear to let go. (I’ve tried the triggers on four other 504s. One was quite good; the others were as creepy as mine.)

Remington tells me that this is because mine was a very early production gun and that they don’t expect their customers to have to lay out money to a gunsmith to get an acceptable trigger. However, I did, and I can tell you that for about $45, a good gunsmith can give you as fine a letoff as there is on anything at any price. (My gunsmith, by the way, was very impressed with the rifle. “Robust,” and “full of good ideas,” were some of the words he used to describe it.) **GRAND GROUPS **
That’s about the end of the 504’s shortcomings. In the end, you pay for accuracy, and I am here to testify that my 504 is one of the most accurate .22 sporters I have ever shot, right there in the very top rank. It shoots everything well, and with ammo that it really likes it produces groups (5 shots at 50 yards) so miniscule that I won’t tell you what they measured for fear you will think me a liar. Suffice it to say that if a fly had landed on the target at 25 yards I could have killed it, and if it had landed at 50 yards I probably could have killed it.

The receiver, bolt, and bolt lockup are so much stronger than necessary that I can only assume Remington will bring out the 504 in other, more potent cartridges. That may be a while, however. When people find out what a terrific rifle this is, the company will be very hard put to make enough in plain old .22LR.