Get it wrong at the range and kiss your season good-bye. 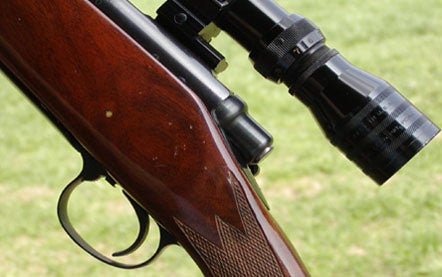 My favorite all-time sighting-in screwup occurred in Africa in 1978. A member of the safari I was on whined perpetually about the trackers, the game, and his rifle’s alleged inability to hold its zero. The professional hunter did not appreciate the nonstop bitching at all, and finally he had had enough. “Tom,” he said sweetly, “I think you should resight your rifle again. Why don’t you rest it on that little hill there and shoot at that mopane-tree knot?”

The hill he pointed to was a safari-ant apartment complex, and when its residents were serenaded by the bellowing crack of a .375 H&H;, they decided on payback. In the best safari-ant tradition, they swarmed into Tom’s clothing and, at the same precise instant, gave him several thousand small jolts of formic acid. Tom shrieked, tore off his clothes, and stampeded in the general direction of Botswana, tripping over the occasional puff adder as he ran.

You don’t have to anger the ants to get into trouble when you’re sighting in; all you have to do is commit one of three common blunders.

I once gathered many different brands and bullet weights of .30/06 ammo and fired them in a very accurate rifle without changing the rifle’s zero. When I was done, the target looked as if I had hosed it down with a machine gun. Bullets went everywhere.

Some rifles are wildly inaccurate with certain loads and tack-drivers with others. Some will shoot only one load, period. I have a .270 that will shoot only the old Trophy Bonded bullets that were made in Houston back in the 1980s. I would never sell that rifle because it is Death Its Own Self, but I’d never trust it with any other kind of bullets.

(2) LET IT BOUNCE
When you sight in, you have to do it on a rest that is firm but not hard. If the forearm is sitting on a hard surface, it will bounce at the shot, sending your bullet high.

If you’d really like to get a false zero, rest the barrel on something-it doesn’t matter whether it’s hard, soft, or pleasingly firm-your bullets are going for a ride upward.

It also pays to rest the fore-end at exactly the same place for each shot. In other words, don’t have it resting nearly at the sling swivel for one round and near the floorplate for the next. That breeds inconsistency. And some rifles are very fussy about their preferred degree of firmness. I’ve owned numerous guns that I could not shoot accurately over a hard sandbag because they’d bounce. Only a softer sandbag made them happy.

(3) MAKE THAT BARREL GLOW
As rifle barrels get hot, two things happen to them-both bad. First, any stresses that are present in the steel will cause the tubes to warp. And second, you will create a mirage from the heat that rises off the barrel, causing you to see your groups as being higher than they are.

If you shoot a magnum rifle, or a rifle of any caliber with a lightweight barrel, you are going to have problems with overheating. Fire no more than three shots at a time, and let the barrel cool to where it is no hotter than tepid (it’s way too hot if you can’t hold on to it and count to 10) before you continue. I’ve found it useful to bring two or three guns to the range. This lets me shoot one while the others are cooling. (You don’t have three rifles, you say? Buy until you do.) If there’s an electric outlet near the firing line, plug in a fan and let its breezes cool your barrel’s fevered brow.

To really make certain of where your rifle is shooting, try this as a final step: After you’ve sighted it in over a rest, shoot from the prone or any other position where you get your hand on the fore-end as you will in the field. If you use a sling to shoot when you hunt, use it now. The same applies to bipods or any other kind of support that you might rely on. Picky? You bet. But picky people make the best rifle shots.

Field Checkups
A scope can get bashed out of zero with relative ease, and there you are, wondering: Will my bullet go where I aim? The solution is the Bushnell Deluxe Professional Boresighter (Model 74-3333). It will do more than get you on the paper fast when you sight in; by noting where your crosshairs intersect on its grid screen after you’re done zeroing, you can see whether or not that fall down the cliff threw your scope out of whack-without firing a shot. It costs $125 and will fit any bore from .22 to .45.