There are accurate rifles...and then there are Jarretts. 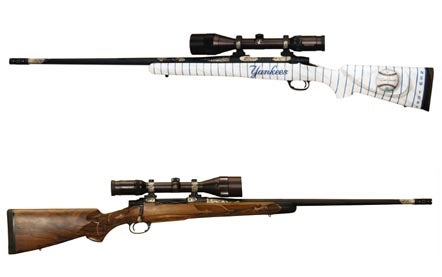 In 1986, I was visiting with knife-making great George Herron in South Carolina when he mentioned that there was a gunmaker named Kenny Jarrett in nearby Jackson whose rifles were more accurate than anything he’d ever seen. Herron showed me some targets he’d shot with a Jarrett rifle, and the effort of not wetting myself caused me to turn several alarming colors. Kenny Jarrett, a farmer and a self-taught gunsmith, had brought a whole new standard of accuracy to big-game rifles.

Jarrett started building guns as a hobby and in 1979 went into business using factory actions, various custom barrels, and the very first synthetic stocks. His aim was to produce big-game rifles that would shoot under a minute of angle, which, in those days, was an absurd idea. No one could make such a gun, and no one expected it. Any centerfire hunting rifle that would put three shots in less than an inch, all the time, was a one-in-a-million freak.

THE PURSUIT OF THE ONE-HOLE GROUP
Jarrett had considerable experience building benchrest rifles and had set accuracy records with them. He reasoned that if he applied the standards involved in that sport to big-game rifles, he could achieve his goal. Other gunsmiths had doubts. Some thought that the precision you could get with a benchrest rifle, firing small-caliber cartridges with small powder charges, would be unattainable with big-game rounds. Others believed that hunters would never pay the price. Benchrest competitors, who are basically crazy, will pay any amount of money for their rifles-as long as they’re perfect.

The naysayers were wrong. Jarrett was able to build rifles in all calibers, and even though they were roughly finished (once in a while, he gets these old rifles back for rebarreling and thinks, My god, did I build that?) they shot to a standard that no one had seen before.

**BEANFIELD RIFLES **
As it turned out, South Carolina was the ideal place to build such a rifle because it’s the home of hunters who shoot whitetails over beanfields and make a specialty of long, long shots from tower blinds. And when you shoot at a 100-pound deer from 400 to 600 yards, superaccuracy becomes very important.

So people heard about the gunmaker in Jackson, and they paid his prices. But there were problems. Jarrett was forced to take factory bolt actions and “blueprint” them-remachine them to be virtually perfect. It was time consuming, but there was no other way to get the results that he wanted.

Barrels were also a problem. Even those that were made to benchrest specifications (interior dimensions that varied no more than three ten-thousandths of an inch for the length of the bore) would not shoot to his standard, and he was rejecting a third of the barrels that he bought. What he needed was a tolerance of no more than a ten-thousandth of an inch, and to get it he would have to make his own barrels. It took a year and a half to learn how, but he did.

One indication of how far he will go to get what he wants comes at the end of the barrel-making process, when a lead slug is impregnated with polishing compound, fitted to the end of a steel rod, and pulled back and forth through the barrel. This is called lapping and gives the bore a mirror finish. It takes about 1,100 strokes, and just about all barrel makers use a machine for the process.

Jarrett’s barrel specialist, however, believes that there comes a point when you can “feel” that the job is done. This is only possible when you lap by hand, so that’s how they do it to Jarrett barrels, hour after weary hour.

[NEXT “Under One Roof”] UNDER ONE ROOF
And so, over the years, Jarrett has worked toward building complete rifles-lock, stock, and barrel. In 2000 he began production of his own bolt action, the Tri-Lock; in 2003, synthetic stocks.

Today, a dozen people work in his Jackson shop, including two men wwho do nothing but break in new rifles and develop handloads for them. The standard now is 1/2 inch or better (very often better), and these two gentlemen make sure that before a rifle departs, it will deliver what Jarrett has promised, every time you shoot it.

Like much else that goes into Jarrett rifles, this kind of work requires both money and time. In the larger-caliber guns, where bullets are expensive, it can cost $1,200 just to do the break-in and load development.

The fit and finish of the rifles is also elegant. He offers such refinements as a powdered-epoxy coating for the metal (in lieu of bluing) that is impervious to everything except nuclear war. And his paint jobs can be something to behold. The last time I was at his shop I saw a rifle that had been made for Bobby Richardson, the Yankees’ great second baseman. The stock was painted white with Yankee pinstripes, and the barreled action was inlaid with gold mementos of Richardson’s Gold Glove awards, All-Star team selections, and World Series championships.

ANY WAY YOU WANT IT
Time was, Jarrett would build you any kind of rifle as long as you wanted one that had a synthetic stock and was heavy. Now there are three basic models, and they look like this:

The Signature is available in just about any caliber, including Jarrett’s own souped-up .300 magnum. You can get it with a synthetic, wood (elaborately checkered fancy walnut), or laminated-wood stock. The standard barrel is 25 inches long, and muzzle brakes are recommended for cartridges over .30 caliber. Without a scope, the average weight runs 81/4 to 81/2 pounds. The base price is $6,880.

The Wind Walker is Jarrett’s lightweight model, scaling just over 7 pounds without a scope. You have the same wide range of calibers to select from, but with a 24-inch barrel, a synthetic stock only, and a base price of $6,650. Because of its lighter barrel, the accuracy guarantee is 3/4 inch.

The Professional Hunter is a takedown gun that comes in its own fitted case with two scopes, and in any caliber you want, although most people get .375 H&H; and bigger. Iron sights are also included, and you have the option of a wood or a synthetic stock. This model starts at $9,390.

All of Jarrett’s rifles are delivered within 90 days of the date of order, unless you want them engraved. You can buy one with Leupold or Swarovski scopes in Talley mounts, as well as a Murray sling and 20 rounds of custom-loaded ammo.

Jarrett makes no apology for his prices because he is making something that you just can’t get anywhere else. Before me are three targets that I fired a few months ago in South Carolina: a .300 Jarrett Signature rifle averaged .183 inch; a Professional Hunter in .416 Remington grouped in .491; and a special-order single-shot rifle that he built for the .50 Browning machine gun cartridge put three shots in .697. I don’t know of anyone else who would build such a firearm. It’s not reasonable. But then Kenny Jarrett is not a reasonable guy.