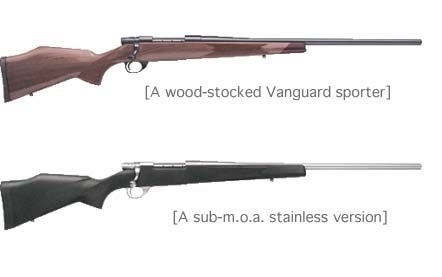 Roy Weatherby succeeded in the gun business by making rifles that were fancy, flashy, powerful, and distinctive. If you carried a Weatherby, you were making a statement, and part of that statement was the fact that you were willing to spend major bucks on a hunting rifle.

With the success of the Mark V, Weatherby looked to broaden his market, and in the late 1960s, he did so by importing a Japanese-made rifle that he called the Vanguard. It was a simpler, less expensive design, chambered for standard calibers rather than Weatherby Magnums. Made by the firm of Howa, it was a conventional two-lug bolt action with its own distinctive silhouette. Though medium-priced, it has always been a very high-quality rifle.

**SOMETHING FOR EVERYONE **
Weatherby has recently expanded the Vanguard line, and it now comes in all manner of styles and calibers from .222 to .338 Winchester Magnum, with some Winchester shortfats thrown in. There are wood-stocked and synthetic-stocked versions, carbines, and stainless- and blue-steel Vanguards. There is a Compact model built for shooters of small stature that is available with an additional full-size stock that lets the gun-in the company’s words-“grow with the shooter.” What all these rifles have in common is that they are reasonably priced (from $476 to $919; 805-466-1767; weatherby.com) and very, very well made.

Because Weatherby is public spirited and anxious to keep me out of mischief, they sent me a new Vanguard to play with. It’s a blue-steel (actually a matte black) synthetic-stock rifle in .257 Weatherby Magnum. The rifle weighs 9 pounds with scope; it is not something you’d want to carry up a mountain. Rather, it’s designed for deliberate shooting at long range. If you’d like to sit in a haystack and wait for a big buck to come sneaking into a field 300-plus yards away, this is the rifle for you.

Accuracy, with factory ammo, was very good-1.1 inches at 100 yards. If you want better than that, Weatherby makes a sub-m.o.a. Vanguard that’s equipped with a special stock and guaranteed to shoot .99 inch or better.

My overwhelming impression of this rifle was of its high quality. The fit and finish were outstanding; the trigger pull was good; the bore was very smooth and there were no rough spots, toolmarks, or paint blobs anywhere.

Roy Weatherby would be pleased. It may be sold at a price that most people can afford, but it’s a gun that’s a cut above the ordinary.