Roll Out the Barrel

It's the biggest and best investment you can make in a rifle. 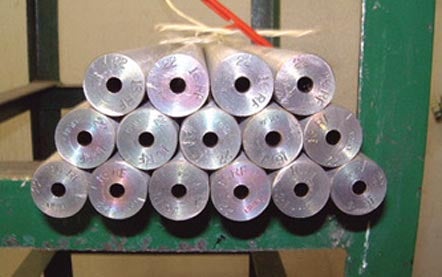 About a year ago I decided my old .22 rimfire could use a new barrel. The original still had plenty of life in it, but it was battered and scratched, and rather than invest the money in having it repolished and reblued, I had my gunsmith replace it with a match-grade stainless-steel barrel from Lilja Precision Barrels in Montana. My .22, with no other changes, was thus transformed from a very nice-shooting rifle to the most accurate .22 I’ve ever used. After I realized that it would shoot tiny groups with whatever ammo I fed it, and do this all day long, I ran around in circles making little squeaking noises.

The moral: When it comes to accuracy, the barrel is probably three times as important as all other factors put together.

FACTORY VS. CUSTOM
The main difference between factory and custom barrels lies in the way that they’re made.

Just about all major rifle makers use the hammer-forging process to shape their barrels. In this process, a short, fat barrel blank (a steel rod with a hole drilled through it lengthwise) is placed over a mandrel that carries a reverse impression of the rifling. Then a series of hydraulic hammers beats the hell out of the unfortunate blank, literally pounding the rifling grooves into the bore and simultaneously lengthening the tube, and within a minute you get a barrel that lacks only a chamber and threads for the receiver. Most custom barrels are produced by a process called button rifling, which was developed in the 1950s and is reasonably fast, but not nearly as fast as hammering. A tungsten-carbide button with a reverse imprint of the rifling grooves is pulled through a blank by a hydraulic press. If done slowly and with care, this will produce a truly superior barrel.

The oldest method of barrel making and the least used today (because it is by far the slowest) is cut rifling. Here, a small cutter, or hook, is pulled through the bore, paring away a tiny amount of steel with each pass. This is repeated until a single rifling groove is formed. Then the hook is shifted to a new position and cuts the next groove. Considering that all rifle barrels use either four or six grooves, this can take a while. The advantage claimed for cut rifling is that it creates no stresses within the barrel because nothing is bashed, pounded, or stretched.

CHOICES
Custom barrel makers divide into two groups. Douglas (benchrest.com), Shaw (ershawbarrels.com), and McGowen, for example, make highly affordable barrels that are better than what the factories put out. I’ve shot a whole bunch of Douglas barrels. The worst of them was good, and the best would suck the breath out of your lungs-they were that accurate. This class of barrel is the best choice for a hunting rifle because any gain in accuracy you’d obtain from a more expensive barrel would go unrealized in the field. The cost, including chambering, threading, polishing, and bluing (which are performed by your gunsmith), will probably come to about $350.

If you are a varmint hunter or an accuracy nut, you can go to makers such as Lilja (riflebarrels.com), Schneider, Hart (hartbarrels.com), H-S Precision (hsprecision.com), Kreiger (kriegerbarrels.com), or Shilen (shilen.com) and buy a match-quality barrel-and you will pay for it. Lilja barrels, for which there is at least a two-month wait, run about $600 to $700 installed.

There is lots of information on this topic to be had on the Internet, although a lot of it is contradictory. Use it as background material, and do not attempt to impose your newfound knowledge on your gunsmith, who will then be justified in bending a barrel wrench around your head.

[NEXT “How to Pick One”] **HOW TO PICK ONE **
A gunsmith can wreck the best barrel by doing a poor job of installing it, so the first thing you want to find is someone who does a lot of rebarreling. Get the names of prior customers and aask them what kind of a job he did. Then, listen to the man. If he tells you that something is a bad idea, he’s right. With that in mind, here’s your checklist:

** Stainless or Chrome-Moly?** Chrome-moly (so called because it has significant amounts of chromium and molybdenum in its alloy) can be blued, but stainless cannot. Stainless is somewhat more expensive but will last longer because it’s more resistant to erosion from powder gas.

** Weight?** Barrel weight is usually given in terms of taper, or diameter. Tapers vary from maker to maker, but not by much:

No. 1 taper-for very light sporters only, such as the .243, .257 Roberts, and 6.5×55. I am not crazy about this taper because I like some weight out in front-but you may love it.
No. 2-in my eyes, the best weight for any non-magnum cartridge.
No. 3-just the ticket for the saner 7mm and .300 magnums.
No. 4-for the powerhouses and the really hard kickers from .338 on up.
No. 5-for elephant executors and buffalo busters from .416 on up.
Straight taper-for varmint rifles only.
Chamber? There are two kinds-standard (or SAAMI, for the Small Arms and Ammunition Institute, which establishes standard specs for all things gunny) or target. If you buy a match-grade barrel, your gunsmith may insist on reaming a target chamber and will act gut-shot if you tell him no, you want a SAAMI chamber.

Target chambers are reamed to exacting minimum tolerances and ensure that the bullet is held in precise alignment with the bore. This works only if you are willing to exercise very strict control over your brass, which requires that you handload, or stick to one brand of ammo. But if you run out of ammo in the field, or it goes astray in the airlines (mercy, how could that ever happen?), you’re in trouble. What you borrow probably won’t chamber, or it will chamber and become irredeemably stuck.

You want a chamber that will accept anything of the right caliber that you shove in it, and if you lose a tiny bit of accuracy, so what?

So listen to your gunsmith, and when you get your new barrel, clean it properly. You can have dirty thoughts, but your barrel should be spotless.