This is an ugly brute, but it could be the perfect varmint rifle 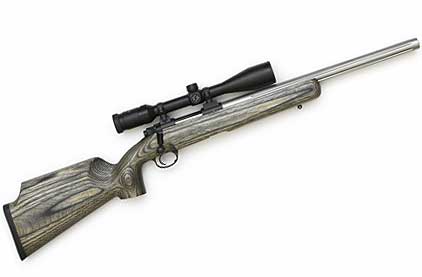 THE INSIDE STORY
The Kimber Model 84M SVT (Short Varmint Target) is what’s known as a “pickup gun,” a short, handy rifle that you can carry day in and day out to shoot whatever you think deserves a bullet. It is, to steal Thomas Hobbes’ phrase, “nasty, brutish, and short”-a pronounced case of form following function. It is also the most schizophrenic rifle I can remember shooting. When fed ammunition it didn’t like-which was anything with bullets that weighed 55 grains-it shot groups of five that averaged 2.105 inches. For a rifle of this type, printing 2-inch groups is cause enough to grasp it by its massive muzzle and throw it into the nearest catfish-breeding pond. But stick around.

With ammunition it did like, which was anything that used bullets of 50 to 52 grains, it shot .500 inch on the average, and with some handloads that it really liked, it achieved .324-inch groups, the smallest of which was .274 inch, making it one of the two most accurate production centerfire rifles I’ve ever tried.

The SVT’s massive barrel allows you to shoot and shoot without the gun’s shifting its point of impact, but it also means that you must use high rings, and that you can’t mount a scope with a large objective lens.

The trigger is not only very light (as it should be) but so clean and crisp that every manufacturer of varmint rifles should be required to snap it for half a day.