Think of this SHOT Business Magazine roundup of the year's new guns as a preview for the 2006 SHOT Show. PLUS: Links to Dave Petzal's reviews of new guns from the show 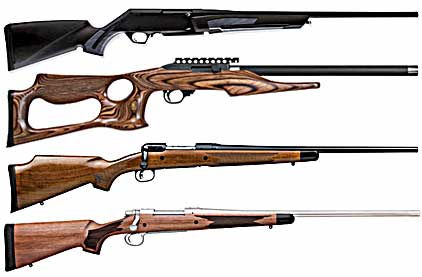 This is going to be a very rich year for rifles. Though shotgunners and handgunners will see their share of new products, these will be dwarfed by the new rifle offerings. And there’s something to appeal to just about every segment of the market.

Look for new gas-operated semi-auto big-game rifles from Remington and Winchester. Cowboy-action shooting remains a viable segment, and new guns are coming to market to service it. Hunters who favor lever guns won’t want to miss Marlin’s new line. It’s designed to use the new Hornady Lever Evolution cartridges, which provide a significant increase in performance over traditional lever-gun loads.

Upper-level shooters will find an innovative new switch-barrel bolt gun from Merkel, while Ruger brings out its popular and compact Frontier Rifle in stainless steel.

Rimfire shooters have not been ignored either. Several companies are coming out with high-quality, target-grade trigger systems in their proven rimfire lines. The Browning T-Bolt is back with the same basic features and a new feed system. Also, a number of makers have made improvements to their existing product lines.

All told, it’s going to be a big year for riflemen.

Click on a gun to see a bigger picture

Browning BAR
**
The newest additions to the line, the ShortTrac and LongTrac Stalker models, feature composite stocks and forearms in matte-black finish and European styling.

The A-Bolt M1000 Eclipse
**
It has a matte-finish stainless-steel receiver and a heavy stainless-steel barrel. The receiver is fully glass bedded. The gray laminate stock has a satin finish, a thumbhole grip and a Monte Carlo cheekpiece. The Eclipse will be available in short-action calibers that include .22/250, .308 Win., .270 WSM, 7mm WSM and .300 WSM.

Marlin 917
**
The first Marlin rimfire to be offered in the popular .17 HMR, the 917 is fed by a seven-round magazine. The 917 also features a black synthetic stock and molded-in checkering.

Marlin 925R
**
This new variant of the popular bolt-action .22 LR comes with a sporter barrel and a seven-shot magazine. It’s drilled and tapped for optics and has sling swivel studs.

Navy Arms Quigley
**
Chambered for .45/70, the Quigley Rifle has a 28-inch octagonal barrel with double set triggers. Its color case-hardened receiver, trigger, patch box, hammer and lever are true to the period.

Navy Arms 1892 Perfect
**
for cowboy-action participants, the 1892 series will be available in three versions-two with octagonal barrels (24.25 and 20 inches) and one with a 19-inch round barrel. Calibers include .357 Magnum and .45 Long Colt.

Remington Model 700 CDL SF Limited
**
A new limited-edition Model 700 offering from Remington, the CDL SF Limited in .30/06 Springfield, commemorates the venerable cartridge’s 100th anniversary. Its features include a stainless-steel, fluted, 24-inch-barreled action, a CDL-style stock with R3 recoil pad and an engraved commemorative floor plate. This will be the first gun in a multiyear series.

Remington Model 710 Youth
**
With a shorter stock and a clean 20-inch barrel, this is the perfect gift for the young shooter.

Remington Model 750 Woodsmaster
**
The long-running Model 7400 semi-auto is being replaced by the Woodsmaster 750. The 750 has improved ammo-feed reliability.

Remington Model Seven CDL
**
Based on the existing Model Seven, the new rifle features a classic stock design with A-Grade walnut and a black forend tip and grip cap.

Remington MODEL 700 XCR RMEF
**
The sixth edition of the Rocky Mountain Elk Foundation (RMEF) rifle is chambered for the .300 WSM. The Realtree Hardwoods HD camo stock has an XCR overmolded grip and an R3 recoil pad.

Ruger MK II Frontier Rifle
**
The new Target Grey matte-finish stainless-steel model features a compact barrel (16.5 inches) with a distinctive barrel rib cut for Ruger rings, to mount a forward intermediate-eye-relief scope. A pair of rings is supplied with each rifle, as is a Weaver-style base plate, to increase scope-mounting options.

Savage Classic
**
The new Classic features the AccuTrigger, a hinged floor plate with a straight-line feed, a high-luster blued-barreled action (no sights, drilled and tapped for scopes), a satin lacquer American walnut stock and a Monte Carlo comb and cheekpiece.