Let your targets tell you about your rifle's problems. 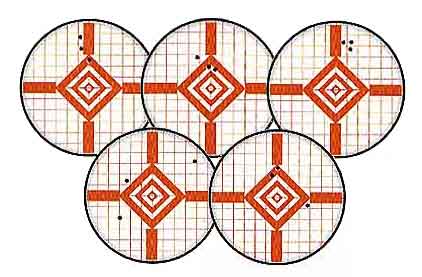 Were this the best of all possible worlds, we would fire three rifle shots at a target, peer downrange, and see three holes clustered within the area of a dime at precisely the right place. But this is not the best of all possible worlds, in that it has a place for chiggers, bad cholesterol, rabies, abdominal fat, leprosy, and Sen. Chuck Schumer (D-NY). And in this vale of sorrow, we often look at our targets and see horror, chaos, and disorder. (It occurs to me that I am being unfair to leprosy. If so, I apologize to Mycobacteria leprae everywhere.)

In any event, we know that something is wrong, but what? Rather than burst into tears, you should regard this as a heart-to-heart talk with your rifle, which, if you can speak its language, will tell you what ails it.

Complete Breakdown. Problem: Your shots are all over the place and you can’t get a group to save your life. There are several causes. First is a ruptured scope. The way to test this is to put a different scope on your gun and see if it groups better. Second is loose bedding screws on the rifle. Check to see if they’re tight. Third is loose ring or base screws. Sometimes, one particular bullet weight will give results this bad. If this is the case, it’s usually because the barrel’s rifling twist is wrong for that bullet weight.

Consistent Flyer. Problem: Your ammo is almost, but not quite, right for your gun. Usually this shows up as two holes close together and the third one off to the side by an inch or two. At 100 yards, this is not a problem, but at farther distances you’ll have trouble. It’s caused by bullets traveling just above or below the optimum speed for that barrel, causing it to vibrate inconsistently. Handloaders can cure it by raising or lowering the powder charge. Non-handloaders will have to try different ammunition.

Inconsistent Flyer. Problem: Most of the time you get good groups, but sometimes you have one shot go astray, and sometimes all three go where they’re not supposed to. Most likely you’re flinching, and if you don’t think you can flinch from a benchrest, think again. You can buy a Lead Sled Shooting Rest ($125; 800-243-3220; midwayusa.com), which virtually eliminates felt recoil, or put a soft gun case or sandbag between your shoulder and the butt. If it were me, I’d get a less punishing rifle.

Rising Group. Problem: your groups are okay, but they keep moving up on the target, sometimes straight up, sometimes up and left or right. This is caused by an overheated barrel. When a tube gets too hot, it warps slightly, sending bullets errantly, and the heat waves rising from it give you a distorted view of the target, sort of like shooting through a swimming pool. The cure is easy: Let your barrel cool down. I start each group with a cold barrel and never let it get beyond lukewarm.

Stringing. Problem: groups string vertically or horizontally. First, check the barrel bedding. Most barrels today are free-floating-there should be no contact from 11/2 inches forward of the receiver right out to the end. If there is, take the gun in for a rebedding job. Horizontal grouping can be caused by wind at the target that you don’t feel at the bench. Vertical groups can be caused by the fore-end jumping on too hard a surface.