Glassing is good, but biology gets the big bucks. 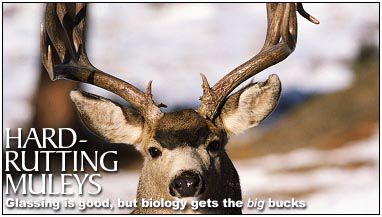 Whitetail hunters have it easy. Innumerable experts dissect the rut for them in books and magazines. The mule deer rut, however, gets less press and is less understood. This is partly due to the muley’s limited range, but it’s also because most people mistakenly think of the mule deer rut as a two-week peak of actual breeding, not a two-month period that seriously affects how bucks behave. Understanding this cycle is your key to a successful season this fall.

The Bachelor Life
In most places, when mule deer season opens in early October, bucks are already eager to breed (see sidebar). In fact, they’ve been ready since they lost the velvet on their antlers around September 1. But very few does have entered the estrous cycle, so the boys remain bunched up in “bachelor” groups, mostly of two to five bucks. These tend to hang out in comparatively small areas near water and feed. You can hunt several ridges before running into a mature buck-and if you do, there will likely be at least a pair and sometimes several. Because of all the eyes, bachelor bands are harder to approach in timbered country, but in open country they can often be glassed at long range and stalked.

At the beginning of the season, bucks will be harder to find. They’ve grown their thick winter coats and gorged for several months, putting on a layer of fat to carry them through the hard exercise of roaming and breeding. Because early-October weather tends to be warm, even in their far northern range, bucks won’t be out and about during daylight very much. Focus on early morning and late afternoon.

Breakup
In the second half of October, all of a sudden the company of other bucks doesn’t seem quite so appealing and the bands dissolve, making things a little easier for the hunter. Lone bucks can’t guard themselves as effectively, and the impending rut makes them wander more. The weather may continue to be fairly warm, so they won’t travel as much as they will later on, but they do move out of their bachelor “eating hole.” They still normally stay away from the doe-fawn groups at this point. I’ve hunted late-October mountains that were almost paved with sign of does and small bucks down along the creeks; just above this abundant evidence, deer tracks almost disappeared, not to reappear until near the highest ridges, where far fewer (but far larger) bucks hung out.

This is a glassing game. Get up high, preferably with the sun at your back, and don’t show yourself against the skyline. Mule deer can see as well as bighorn sheep, and mature bucks are even more sensitive to any suspicious activity. Early and late in the day you may find them up and feeding, and often late into cool mornings, but just as often you’ll find them bedded. Big muleys like a view from near (not on) the head of a coulee or top of a ridge, especially with thick brush or timber or even a rock overhang behind them.

Rutting Hard About November 1, enough older does come into heat to draw these mature bucks out. You may have heard that, like bull elk, male muleys gather harems. But instead of actively herding and “keeping” the does, bucks are just hanging out with a doe-fawn group that includes a female coming into heat. Early in the month the really big bucks often still bed far from these groups, cruising them early and late in the day in search of a hot one.

As November progresses, however, the weather tends to turn cooler-and the percentage of hot does rises. During the latter half of the month, big bucks are often out all day, traveling more erratically, over longer distances. You may see one trotting along a ridge in the distance, head down like a hunting dog.

The most common tactic is to find the territorial doe-fawn groups and keep checking on them. At some point a big buck will appeaar. I’ve even seen a band of does attract a growing number of males from morning to evening. Early in the rut you may have to intercept a muley as he travels between his bedding grounds and the does, but later you can try to stalk him among the group-if you watch out for all those wary doe eyes. Calling also works now. I’ve had better luck with grunt calls than rattling, but rattling can attract mature bucks, especially before and after the peak of the breeding. A doe bleat also interests bucks and will often stop a spooked buck if you bump him during a stalk.

The Party’s Over One day it just clicks off. You’ll still find bucks around the does, but they’ll be young punks, taking what’s left over after the big boys have bred. The mature males will retire to their post-rut feeding holes, where they’ll often find other bucks to hang with. Sometimes they’ll rejoin the does after they’ve lost their antlers, but that will be long after hunting season ends. You may find their sheds there, on the winter range, early next fall, but the buck that dropped them will be far away, up in the high country with a bachelor buddy or two, growing fat for another November.