Look in the little places to find the biggest deer. 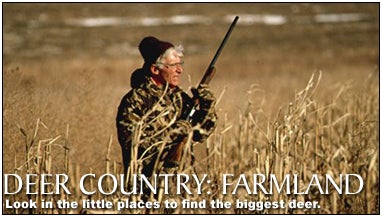 I don’t recall if I saw the antlers or the corncob first, but I’ll never forget the image: a very large whitetail buck emerging from the fog, holding an entire ear of corn in his mouth like a cheap cigar. As I looked at that cob and his huge rack, I didn’t know whether to laugh or shake with buck fever.

When he spotted a trio of does feeding 20 yards from my stand, he tilted his head, spat out the corn, and walked into bow range. Later, he would field dress at 226 pounds, suggesting that this deer hadn’t spit out too many corncobs.

Want a glimpse of today’s hottest big-buck habitat? Train your binoculars on a swath of brush surrounded by a corn, soybean, or alfalfa field. Many record-book deer are coming from states like Iowa, Illinois, and Kansas, but you don’t have to head to the heartland. There are farmlands across the country, of course, and one near you may be your best bet for a big buck.

Escape Artists
Farmland bucks may be more visible than those in more wooded environments, but they aren’t free-ranging livestock. The same deer that seems bovine in the presence of a tractor turns neurotic at any hint of a hunter. Getting close starts with determining travel routes, which tend to be specific in farm country. Whitetails often travel through corridors of vegetation-a creekbottom, a brush-filled draw, an overgrown fenceline-that hide their movements. It’s also stunning how quickly a giant deer can disappear into the slightest topographical wrinkles. I’ve glassed bucks as they slipped into grassy ditches, eased through a swale in a field, or sneaked along the back side of a hill.

Bedding areas are similarly unique. While a farm buck may lie down in a pocket of timber, he’s just as apt to tuck into a brushy fencerow, a standing cornfield, or a tiny patch of shrubs. In recent years, Uncle Sam has created millions of acres of whitetail bedroom in the form of Conservation Reserve Program (CRP) fields. Though a section of switchgrass may look only like pheasant cover, the deer are there, too.

Food, it would seem, should be the least of a hunter’s worries on a farm, but the very abundance of forage can actually make hunting more difficult. Deer are continually switching from one food source to the next and often back again. Soybeans are a prime example; bucks binge on beans from July until the leaves turn brown, then abandon them for acorns, alfalfa, or corn. But come December, beans can get hot again, and even a stubble field may draw bucks for miles to binge in preparation for winter. Key in on the feeding cycles in your area.

Find, Sneak, and Drive
The best stand hunters I know start from a distance, glassing from a vehicle or high vantage point. “Any time I spot a buck, I watch where he’s going and how he gets there,” says farm-country expert Steve Snow. “He is not where he is by coincidence.” Should a buck exhibit a routine, Snow fine-tunes an ambush by making a midday visit to the travel corridor to search for trails, rubs, and scrapes.

Ambush isn’t the only method in farm country, of course. I know several hunters who’ve taken fine whitetails by still-hunting a tangled draw or abandoned farmstead. Snow has killed several fine bucks by spotting them, bedded in or near cornfields, and executing a stalk. It’s one of the most successful tactics, even for bowhunters. “You get a nice deer laying down sign in the timber, and that’s where everyone waits for him,” he says. “Meanwhile, the buck’s spending all his time in the fields and not hitting the woods until dark.”

Drives can work here, too, with some adaptations. Since security cover is frequently small, drivers must be totally silent as they move into position. And instead of having standers block exit trails-where every shot will be at bucks hitting Mach 1-consider positioning them in distant escape cover. Once deer elude the drive and reach the next llittle woodlot, they immediately calm down. Then you’re shooting at standing deer, often at close range.