Remingon Model 700: A Bolt for the Ages

It’s the first modern bolt action. It’s been made in scores of configurations and who knows how many calibers. Well... 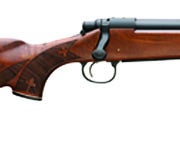 It’s the first modern bolt action. It’s been made in scores of configurations and who knows how many calibers. Well over 5 million have been produced, making it one of the most successful sporting firearms of all time. Since the late 1960s it has served as the standard sniper rifle for the Army and Marine Corps and as a tactical rifle for innumerable law-enforcement agencies. Its action has served as the basis for more superaccurate rifles than any other. It is the Remington Model 700, and this year is its 50th anniversary.

Simple Brilliance
After World War II, Remington Arms looked out on a changed world. The unlimited supply of skilled machinists the company could draw on before 1941 had gone into other industries, and it now had to design a line of firearms that could be produced inexpensively, with a minimum of hand labor.

For this, it turned to designer Merle “Mike” Walker. Walker was a gifted engineer and a driving force behind the then-new sport of benchrest shooting. He knew not only how to make rifles, but how to make them accurate. Walker had his work cut out for him. The standards by which all other rifles were measured were the Model 98 Mauser and its illustrious offspring, the Model 70 Winchester. These guns set the bar very high. Whatever he came up with would have to be very different, and very special, in its own right.

The Model 70 and Model 98 actions are simple in the number of parts they contain, but complicated to produce. Before the era of CNC equipment, the bolt and receiver required extensive and complex machining and skilled people to perform it. This drove the production time way up (and consequently the price). What Walker did was simple and brilliant. Rather than carve an entire mechanism out of solid blocks of steel, he made parts that could be produced easily and cheaply and then assembled into a mechanism. The action he came up with requires roughly one-third the machine time of a Mauser 98 or Winchester Model 70.

The Sum of All Parts
His new receiver was a simple tube that, because it was round, was at once stiffer than those of the older rifles and easier to bed in a stock. The traditional full-length rotating extractor was replaced by a spring-steel clip on the bolt face; the new trigger mechanism was assembled from inexpensive stamped parts; the recoil lug, rather than being machined as part of the receiver, was stamped, and held in place by the barrel.

Walker’s baby was called the Model 721 and came into the world in 1948. It was quickly followed by a short-action version, the Model 722. The 721 was not a beautiful baby. The wood was plain and uncheckered. The trigger guard was a cheap-looking bent-steel strap. It was obviously an economy gun. There were other complaints. People did not see how the small extractor could work reliably. They saw that the cartridge was simply shoved out of the magazine and into the chamber, rather than being grabbed by the extractor and guided in, and they whined about that.

But the two ugly ducklings sold for $75—$30 less than a Model 70, big money in 1948. They worked fine despite the whining, and most important, they shot. Riflemen beheld the groups the new Remingtons shot and forgot all about their lack of looks and supposed deficiencies. Custom gun builders learned very quickly that if a client wanted a superaccurate rifle, the action had better come from a Model 721 or a 722.

Winning Number
But Remington saw that something cosmetically nicer was in order. And so, in 1962, it brought forth the Model 700. There were two versions—the fancy 700 BDL and a plain-Jane 700 ADL. They were much nicer looking, and they have been followed by 700s in near countless configurations and styles. The rifle is one of the most successful sporting arms ever produced.

It has influenced sporting-­rifle design in the 20th and 21st centuries. In 1957, when Savage designer Nicholas Brewer created the Model 110 bolt action (which is thriving today), he used the same principles that Mike Walker had set down a decade earlier. And half a century after that, the creators of the Ruger American Rifle and the Thompson/Center bolt actions have not neglected Walker’s lessons.

Besides all of its remarkable attributes, you can still get a 700 in nearly any setup you want. If you count the models turned out by the Remington Custom Shop, you can choose from 53 different versions of the gun.

There will always be Model 70s and Mausers. People dote on them, just as people dote on hand-forged knife blades. But part of their appeal is that they are of the past. The future, for the last 50 years, has been the Remington Model 700.