How To Shoot A Winter Coyote

Improve your winter coyote hunting with patience, an electronic call, and a good vantage point 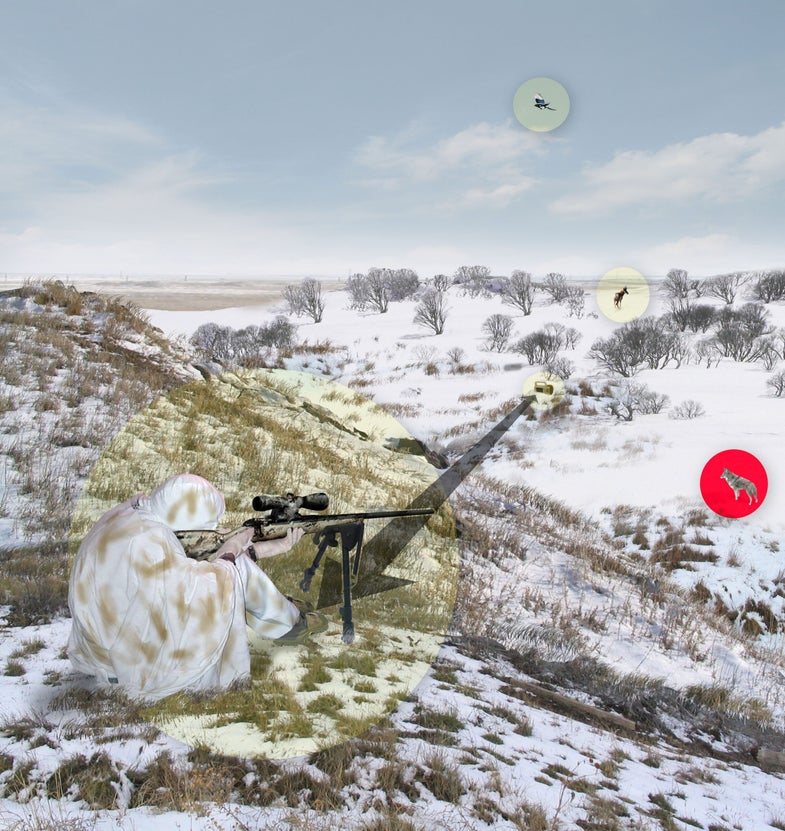 December through February can be a tough time for hunters. If your tag is punched or the season has closed, you’ve got a long wait until spring gobblers. But with coyotes you’re looking at a year-round season—no limits, no license. Outfitter Cory Lundberg (codahunts.com), who guides predator hunters in Wyoming and Utah, says, “This kind of hunting is a waiting game. A mature coyote can take a long time to come in, and you must be able to sit still the whole time. If he smells, sees, or hears you, the game is over.”

The Call Digital electronic calls from Fox pro (gofoxpro.com), especially those that mimic a distressed rabbit, are lundberg’s favorites. He’ll also use fox distress calls. He places the speaker 100 to 200 feet away from the hunter, mainly to keep the coyote focused on the call, not the hunter.
The Setup Lundberg often hunts in sagebrush flats. The key is to set up at an elevated position with a good vantage point—the idea being to spot the coyote before he spots you and then watch him close the distance. Since a coyote often tries to approach from downwind, try to set up in a quartering wind to reduce its chance of scenting you.
The Signs one way to tell if a coyote is approaching in thicker cover is to look for a following magpie or crow. They’ll fly near a coyote to scrounge on the leavings. Spooked antelope or mule deer are also good clues of a coyote on the move.
The End game Lundberg enjoys the challenge of getting a coyote as close as possible. The shot can be anywhere from 15 to 300 yards. “When the coyote turns broadside—no matter the distance—I know something has triggered his defense mechanisms. This is when I tell the hunter to take him.”