How Factory Rifles Are Capable of Delivering Sub-Half-MOA Accuracy

__ This past spring, my three finalist rifles for Field & Stream’s 2012 Best of the Best Awards (see the... 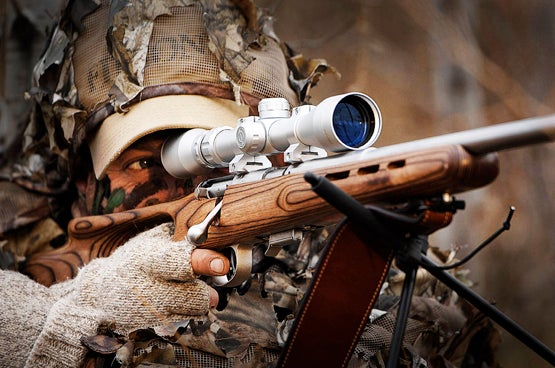 This past spring, my three finalist rifles for Field & Stream’s 2012 Best of the Best Awards (see the September issue for the winner), all unaltered factory bolt actions in the low to medium price range, shot not only sub-MOA but sub-half-MOA. I’ve never seen anything like this before, but I’m not surprised. The finalists shared various attributes–which are found on many other factory rifles as well–that are responsible for this astounding improvement in accuracy, and among them are these:

Glass Bedding
This technique em­ploys epoxy–by itself, combined with fiberglass, or mixed with metal particles. It’s a cheap, permanent way to get a perfect bedding job for a rifle action, and it is used either by itself or in combination with pillar bedding. Rather than painstakingly shaping the stock to fit the action, you slap a glob of glass into the action mortise, clamp the stock and the barreled action together, and let the adhesive harden. The result is a perfect, permanent, fit.

Pillar Bedding
Benchrest shooters knew as far back as 1970 or so that rifle actions tended to squirm in the stock under the stress of firing; they also suffered from unequal stress on the bedding screws. The cure was to bed actions on two aluminum tubes, or pillars, that were permanently glued into the stock. This provided rigid metal-on-metal contact, rather than metal on wood.

Free-Floating Barrels
Before Elvis got fat, the hallmark of a good rifle was a nice, tight fit between the fore-end and barrel. But achieving this in a mass-​­produced rifle was nearly impossible; even if the factory pulled it off, the wood invariably shrank or swelled, putting all sorts of conflicting pressures on the barrel, causing it to shoot erratically. Today, just about all rifles, wood- and synthetic-stocked, factory and custom, have free-floating barrels where there is no contact from the chamber forward.

Decent Triggers
It follows as the night does the day that if you have to fight your trigger to make your rifle go off, none of the groups are going to be very good. Safe triggers with light, clean pulls date back to 2002 when Savage introduced its adjustable AccuTrigger. A modification of the two-stage or military trigger, it is the foaming crest on a tidal wave of good triggers that have followed in its wake.

Good Barrels
A good barrel must be perfectly straight, have its crown cut perfectly square with the bore, and have the bore drilled precisely through its center. In addition, the rifling grooves and lands must be of exactly the same depth all the way from the muzzle to the chamber. This is simple stuff, but it requires considerable care in manufacture. There are still plenty of rotten factory barrels out there, but I’m seeing a lot more good ones now.