There's a lot to love about Italian shotguns. 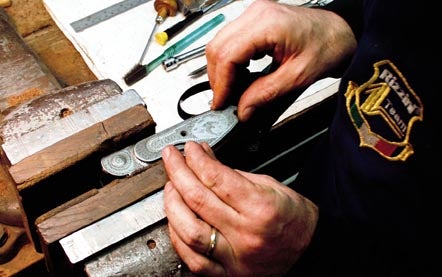 Northern Italy’s “Gun Valley,” the Val Trompia, began turning out guns back when firearms consisted of little more than a metal pipe and a match. When Eli Whitney built the first arms factory in Connecticut in 1798, Italians had been making locks, stocks, and barrels for 300 years.

Italian guns aren’t exactly news in the United States. The first Italian Invasion took place in the 1960s, as American target shooters discovered Perazzis. Their wonderful handling and incredible durability made them beloved by trapshooters.

The second wave hit our shores in the early ’90s, as the Beretta 390 and Benelli Super Black Eagle autoloaders caught our collective attention. Beretta autos have taken over sporting clays, and waterfowlers prize the Benelli for spitting out empties regardless of muck, mire, dirt, or cold.

With virtually their entire arms industry concentrated within a few miles, Italians enjoy some competitive advantages. A whole community of skilled craftsmen lives in Brescia. Sourcing parts is simply a matter of driving down the street to visit, say, a rib maker. And as ancient as their gun trade may be, the Italians embrace new technology; you’ll find CNC machines and robotics in their factories.

Over/Unders
Want a clunky 8-pound over/under for firing heavy waterfowl loads? Don’t buy an Italian gun. In general, Italian o/u’s tend to be lighter and trimmer than their American counterparts. Consider Beretta’s wonderful lightweight, low-profile 686 series, now spun off into many variants. My favorite is the 686 Onyx that sells for around $1,600.

One of Brescia’s leading gunmaking families, the Rizzinis, split into three entities, all of which market their excellent o/u bird guns in the United States: F.A.I.R./I. Rizzini, B. Rizzini, and Caesar Guerini. There’s a strong family resemblance among these guns-all have similar actions, rounded Prince of Wales grips, and Schnabel fore-ends. New England Arms imports I. Rizzinis starting at $1,495. SIGArms and L.L. Bean sell the B. Rizzinis, which start just under $2,000. Guerini USA handles, naturally, the gorgeous Caesar Guerini line, which starts around $2,200.

Autoloaders
Americans have been familiar with Italian repeaters ever since Franchi took John Browning’s long-recoil design, put it in an alloy-receiver package, and bestowed the featherlight AL-48 auto upon bird hunters 55 years ago. Italians also build some of the most innovative three-shot guns around, as one look at Benelli’s space-age Nova pump confirms.

A trio of lesser-known Italian autos have impressed me lately with the simplicity of their design: the Franchi 612/912 ($675 and $825), the Weatherby SAS ($749), and the Fabarms Lion III ($939). All feature a return spring on the magazine tube, so there’s no spring in the stock to rust or fill with crud. The gas systems are incredibly easy to maintain.

Best Guns
Italian high-grade side-by-sides and o/u’s may be the finest in the world, and they’re made partly in the old-fashioned way and partly with the most modern machinery. The lines-and the price tags (generally starting at $15,000)-of Fabbri, Piotti, Fratelli Rizzini, or Abbiatico & Salvinelli (Famars) shotguns are breathtaking. They combine the handling and aesthetic qualities of British “Best” guns with drop-dead reliability.