The little shell with the mighty punch. 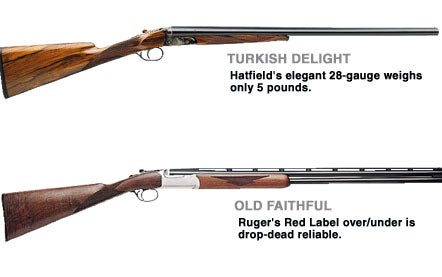 Feathers flew off the rooster as if I’d shot a down pillow out of the sky. The preserve owner turned to me, eyes wide. “What are you shooting,” he asked, “a 3-inch 12?”

In reply, I plucked the skinny, smoking hull from the chamber of my 28-gauge over/under.

That’s the 28-gauge mystique in a nutshell: It hits harder than it should yet goes easy on the shoulder. And you can shoot it out of trim little guns guaranteed to make a bird hunter’s heart flutter. Is the 28 for you? Read on.

MAGIC BULLET?
The 28’s puny shot charge crushes targets and drops birds with surprising authority out to 30¿¿¿35 yards. No, it doesn’t really hit like a 3-inch 12. The 28 isn’t a magic bullet, but it’s an efficient one: Though the shell holds only 3/4 ounce of pellets, they pattern extremely well out of the matching .550 bore, producing few flyers and a short shot string.

Although I’ve shot both wild and released pheasants with a 28, it isn’t an all-around upland gun. The 28 shines brightest at modest ranges: in woodcock thickets, quail piney woods, and dove fields, and on skeet and five-stand setups. Also, in a perfect world, the 28 would replace the poor-patterning .410 as every kid’s first shotgun.

DRAWBACKS
If the 28 is so great, why don’t more people shoot it? One reason is the cost of the ammo. I once shot on the private game farm of a wealthy man who had his own cadre of uniformed gamekeepers, a pigeon ring, and a sporting clays course. He led me to his vault, full of guest guns, from which I selected a lovely 28-gauge Parker Reproduction. My host handed me two boxes of new 28-gauge AAs and cinched a pouch tightly around my waist. “You pick up every one of those hulls,” he ordered. “They’re expensive.”

Once-fired 28-gauge hulls run about 10 cents apiece, compared to 6 or 7 cents for 12s. A box of 28-gauge target loads is about $6.50, a buck and a half more than 12s or 20s. The hunting loads are expensive, too. Yes, I know 12s hold more shot and powder and should sell for more than 28s, but the price difference is a matter of manufacturing and sales volume, not the cost of materials.

The guns themselves can prove difficult to shoot well. A true scaled-down 28-gauge shotgun is the merest slip of a thing, light to carry and quick to mount, but it’s easy to strangle the life out of a slim gun by clutching it too tightly. Moreover, the lighter the gun, the faster it starts, but the sooner it runs out of momentum. A heavy gun helps you follow through; a superlight gun stops dead the instant you stop swinging.

MODELS
At the ’04 Shooting, Hunting, and Outdoor Trade (SHOT) Show in Las Vegas earlier this year, you could usually find me in the back corner of the gun hall, cooing over one of the most elegant 28s I’ve seen in a long time. The new Hatfield (816-233-9106; www.hatfieldshotguns.com) Uplander is the daintiest side-by-side imaginable, weighing under 5 pounds and featuring a case-colored receiver and a beautiful Circassian walnut straight-hand stock. The Turkish-made Hatfields are nicely finished, start at $1,499, and come with your choice of single or double triggers.

The I. Rizzini 400, imported from Italy by New England Arms (207-439-0593; www.newenglandarms.com), is another handsome gun on a 28-gauge frame. Weighing under 6 pounds, this o/u fairly leaps to your shoulder by itself. I took the $1,695 Rizzini to my gun club, where the late-afternoon sun blinds any shooter standing at station 7. My friend Rick, who was helping me test the gun, simply shielded his eyes with one hand and shot targets with the other.

I’d be remiss not to mention the $1,545 28-gauge Ruger Red Label here. Not a new gun by any means, it too is built on a 28-gauge frame and is a delight to tote into the field.

Do you need a 28? Honestly, the 20 is a far more versatile small-bore choice, especially in thhese days of nontoxic shot. However, if you want to shoot a tiny gun that’s a cream puff at one end and puffs feathers at the other, there may be a 28 in your future.