A new o/u and a new auto, as unalike as guns can be. 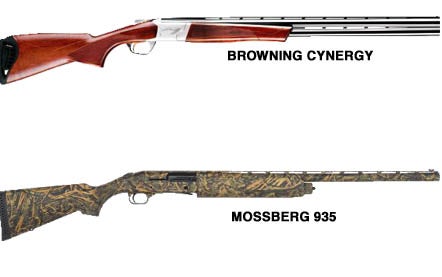 Last fall I had a chance to hunt with two new shotguns designed to appeal to quite different buyers. Browning’s Cynergy is a high-grade over/under marketed to Generation Next, whereas Mossberg’s value-priced 31/2-inch 935 auto aims squarely at plain folks.

BROWNING CYNERGY
You may or may not like the Cynergy’s rakish, stylized lines, but once you swing it, you’ll love the way this new o/u shoots. In building the Cynergy, Browning engineers set out to create the lowest-profile action on the market. Profile-the height of the action measured at the breech-matters to shooters because the lower the barrels sit in your hands, the more naturally the gun points.

The receiver on Browning’s other o/u, the Citori, is very tall because the barrels hook to a hinge pin on its bottom, adding height. The Cynergy’s barrels pivot on a “monolock hinge,” consisting of large C-shaped lumps (shotgun-speak for projections) on the inside of the receiver that fit into matching channels cut into the monoblock of the barrels. Almost as trim as some 20-gauges, lighter than a comparable Citori by a good 6 ounces, and blessed with a crisp trigger, the Cynergy proved to be a terrific rooster gun in South Dakota last fall.

Whether or not the Cynergy’s unorthodox styling appeals to you, your shoulder will appreciate its swooping recoil pad. Shaped like the harp on a Guinness Stout label, the thick pad lowers recoil peaks by 20 percent over the flat one on a Citori. And longer and shorter lengths are available to customize the fit. The synthetic-stocked version (both Field and Sporting models come with a choice of wood or composite stocks) has a comb that adjusts and swaps with other combs (sold separately). Whether the Field version takes off depends on how many shooters yearn to drop $1,900 on a sweet-handling o/u that most definitely ain’t their father’s Superposed.

MOSSBERG 935
With its semi-humpback receiver and slender, checkered grip, the 935 autoloader doesn’t look like a Mossberg. But it’s definitely priced like one, listing for $429 (real-world price) in basic black ($479 in camo) with a sling and five chokes. The 935 makes no pretense at being one gun for all seasons; it’s built for shooting 3- and 31/2-inch magnum loads at waterfowl and turkeys.

The new gun shares the overbored barrel of the 835 UltiMag pump, as well as the top tang safety that makes Mossbergs a favorite of left-handers. Inside, the 935 is a simple auto, featuring a noncompensated action (that won’t self-adjust to handle lighter loads) composed of a few easy-to-maintain parts.

However, my own 935, straight out of the box, spat out 23/4-inch duck loads perfectly. After 100 rounds or so, it even cycled high-velocity 11/8-ounce sporting clays loads. The 935 doesn’t seem to offer quite as much recoil reduction as many other gas autos-but hey, for 400 bucks, let it hurt a little.

The synthetic stock has a molded-in rear swivel, and the gun comes with a shim kit to adjust the fit. The 935 weighs around 71/2 pounds. My gun, with a 28-inch barrel, is a tad muzzle-heavy but swings fairly well. I might choose a 26-inch barrel for all-around waterfowling.

In reentering the autoloader market, Mossberg had to contend with the legacy of its previous auto, the famously unreliable 9200. Take it from me: The 935 is an entirely different gun from its predecessor, and in this world of $1,000-plus 31/2-inch autos, it’s a low-cost marvel.