A Swing and a Miss

If a box of ammo gets you just one dove, here's the cure. 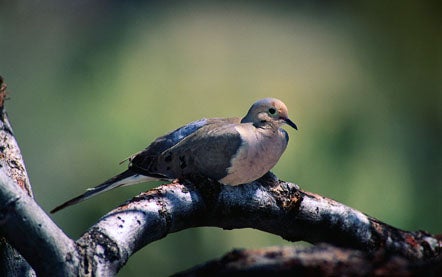 There’s still time. If you filled the sky with lead last season and had hardly a bird to show for it, here are three ways to improve your shooting the month before the opener.

YOU WANT DOVE PATTERNS, NOT DUCK PATTERNS
Does your gun throw patterns that will work for you? The only way to find out is to put pellets to paper at the ranges that you’ll be shooting. Most doves are shot anywhere between 20 and 40 yards, but don’t test a gun at 40 yards if you take all your shots at half that distance. I use a 4-foot-square piece of cardboard, Birchwood Casey’s goalpost-shaped target stand, and 36-inch-wide rolls of brown paper. Shoot a minimum of three patterns with the same choke and load at the same distance (five or 10 patterns are better), changing sheets after each shot. Then use a marker tied to 15 inches of string as a compass to draw a 30-inch circle on each pattern with its densest part at the center.

The vitals of a dove are roughly the size of a golf ball-a little less than 2 inches. To reliably put one or two pellets on that small target, you will need to see a total of at least 225 to 250 holes in the 30-inch circle. If you’re not coming up with enough, you’ll need a heavier shot load, smaller shot, or more choke. A great way to fill out a smallbore pattern is to use No. 9 shot, at least for short-range shooting. Even a puny 28-gauge skeet load of 9s totals 438 pellets, and 9s retain enough energy to kill doves at 20 to 25 yards. For shots out to 35 yards, stick with 8s and either shoot heavier loads or tighten your chokes if you need more pattern density. Long-range, 40-yard-plus dove shooting calls for a 12-gauge with 71/2s and a Modified or tighter choke.

** SMOOTH YOUR MOVE**
One of the most common misses in dove hunting goes like this: You watch a bird come across the field and think Ha, I’m going to kill this one. You leap to your feet, mounting the gun and tracking the dove as it approaches. The bird sees you pop up and commences evasive action, greatly increasing the difficulty of the shot. Meanwhile, you try to follow the juking dove with a mounted gun, a sure way to slow your swing. And you miss.

Solution: Take a trap someplace where you can set up to throw a long incomer. To do this safely, you’ll have to put the trap over the crest of a hill, or else shield the puller behind hay bales or a sheet of 3/4-inch plywood. Sit on your 5-gallon bucket and call for the target. As it approaches, lock your eyes onto the bird, but don’t move until it’s in killing range, then stand and deliver. Concentrate on being smooth, not fast. As you come to your feet, push the muzzle in front of the clay and shoot as the butt touches your shoulder.

CUT THE KICK
Dove hunting takes place in T-shirt weather. With nothing but a thin layer of cotton between you and the butt, you’ll feel every ounce of your gun’s kick. The more it hurts, the worse you’ll shoot.

So lighten up. The promotional dove and quail loads you see at Wal-Mart are often heavier, faster, and harder-kicking than you need for the purpose. Spend a little extra and buy light, 2-dram target loads of 1 or 11/8 ounce in 12-gauge, or 2.5-dram, 7/8-ounce loads in 20.

Another recoil-reducing solution is an aftermarket recoil pad. If you shoot the same gun for doves and waterfowl, the new Sims slip-on LimbSaver (877-257-2761; www.limbsaver.com) may be the perfect solution. Later in the fall when you bundle up for waterfowl season, you can shorten the stock simply by slipping off the pad to shoot those big, slow birds that will look like blimps compared to all those doves you bagged back in September.