A conversion, a single-shot, and a new old favorite. 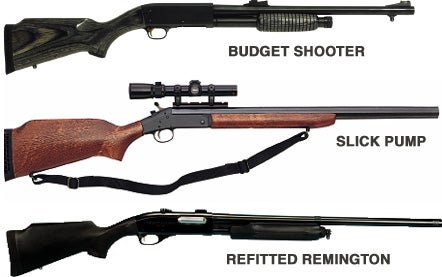 “Many a Midwestern farmboy whiles away lazy summer afternoons shooting the bottom out of a Dixie cup with a slug gun.” I read those wrongheaded words several years ago in a book about sporting arms written by an Englishman. Although it’s gratifying to think our ancestors so traumatized the redcoats during the Revolution that they still believe we are a nation of deadeyes, most of us would rank an afternoon of shooting hard-kicking slug guns at paper cups somewhere between root canal and hitting a thumb with a hammer. Many slug guns aren’t even capable of drilling Dixie cups at whitetail ranges anyway.

There are, however, some notable exceptions. Here are three that pass the paper cup test with quite a bit to spare.

Tar-Hunt DSG
_ Call it Extreme Makeover, Slug Edition._ Known for its bolt-action slug guns, Tar-Hunt (570-784-6368; www.tar-hunt.com) now does a brisk business converting 870s into Designated Slug Guns. The Tar-Hunt people fit a block of steel into the receiver, then insert a rifled, muzzle-braked E.R. Shaw barrel. They tap the receiver and install Leupold bases. With Lightfield Hybreds, I shot several good 50-yard groups and put five shots into 2 inches at 75 yards, tight enough to seriously endanger any disposable beverage cup in the woods.

Ithaca model 37 Guide Series
Ithaca’s (888-948-4222; www.ithacagun.com) rifled Deerslayer guns have a well-deserved reputation for shooting straight. This year there’s a dressy variant called the Guide series, with a black laminated wood stock and a gold-plated trigger. The already slick internal workings of the 37 receive an extra polish. I tested the 20-gauge version, which has a 20-inch barrel with a faster (1-in-24-inch) rate of twist than previous Deerslayer models, the better to stabilize the new breed of high-velocity, premium-bullet sabot loads.

At 50 yards the Guide gun put Federal Barnes Expander slugs into 1-inch and slightly larger groups. The trigger exhibited a total lack of creep and a reasonably light pull. At a trim 61/2 pounds the gun feels almost like a deer rifle in your hands. List price is $599.

H&R; 1871 Ultra Slug Hunter
H&R;’s (978-632-9393; www.hr1871.com) single-shot Ultra Slug Hunter has been around for a few years, but it’s an overlooked bargain that proves slug guns don’t have to cost a lot to be accurate. Available in 12- and 20-gauge, the Ultra Slug Hunter lists for a pittance-$259-and comes with a fully rifled, heavy-contour 24-inch barrel (22 inches in the Youth model). The stock is plain hardwood, and the gun has an exposed hammer and breaks open by means of a button on the right side of the receiver.

The exposed hammer design requires higher scope mounting than I prefer. But that’s my only quibble. The trigger proved a crisp and pleasant surprise for a gun this inexpensive. With Federal Barnes Expander slugs, the 20-gauge Youth model I tried shot groups of 11/2 inches and less at 50 yards. The Ultra Slug Hunter holds only one shell, but it will plunk that projectile into a paper cup at 50 yards or into the vitals of a deer much farther away. And that’s not just whistling Dixie.