Why it'll get you more rabbits and squirrels. 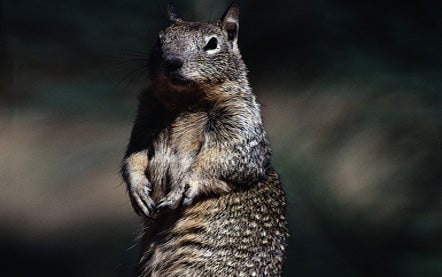 Squirrel and rabbit hunters make up shotgunning’s silent majority. They have no rabbit record books, no fancy squirrel lodges, not even fund-raising banquets where they can pay too much for cottontail prints and beagle pups. Quietly, and by the hundreds of thousands, small-game hunters go hunting just for the fun of it.

A frugal bunch, by and large, small-game hunters shoot whatever shotgun they happen to own, which is, of course, absolutely fine. But there are attributes that make some guns better choices than others.

RABBIT GUNS
From a gunning standpoint, a rabbit is sort of like a ruffed grouse on foot. Cottontails blast out from beneath brambles, blowdowns, and second growth. Most hunters take snap shots at white tails bouncing through cover.

Chokes and Loads: Use an open choke-Skeet or Improved Cylinder-if you walk up rabbits. Rabbits circling back ahead of beagles present longer shots within range of a Modified choke. Cottontails are thin-skinned, fragile, and not difficult to kill. Seven-eighths of an ounce to 11/8 ounces of No. 6 or even No. 71/2 shot usually suffices. The smaller the shot, the more pellets to the ounce, and the greater chance some pellets will slip through holes in the underbrush to hit your intended target. You needn’t use premium ammo, either-garden-variety game loads will flip a rabbit right out of its tracks.

**Action and Gauge: **The ideal rabbit gun would be a 16- or 20-gauge that’s light enough to carry in one hand while you fend off brush with the other. It should be capable of shooting two or more shots, although most rabbits are long gone before you can slap the trigger a third time. For busting brush, I’d pick a double gun, which is easy to break open for stepping safely over deadfalls. It’s about 3 inches shorter than a pump or auto of similar barrel length and easier to handle in a thicket. For the same reason, I’d prefer 26-inch barrels.

SQUIRREL GUNS
Squirrel hunting with a shotgun resembles turkey hunting more than it does conventional wingshooting. You’re shooting from a sitting position, often aiming your shotgun as if it were a rifle.

[NEXT “Continued…”] Chokes and Loads: If you’ve skinned both rabbits and squirrels, you’ve found pellets stuck in the hide of a squirrel that would punch right through the frail skin of a rabbit. Squirrels are tough, but not so tough that you can’t kill them with an ounce or so of quality hard No. 6 shot or 11/4 ounces of 5s. A Modified choke provides adequate pattern density to drop squirrels from all but the highest branches; Full would work better for long-range shooting but might tear up squirrels at closer range. The very tallest white oaks measure 100 feet, or 33 yards, which is within the range of a Modified barrel.

**Action and Gauge: **A 12-, 16-, or 20-gauge makes the most sense. Squirrel hunting is largely a one-shot affair; single-shots work just as well as pumps and autos. Since you will shoot at sitting or slow-moving squirrels, why not put sights on your squirrel gun? In fact, an iron-sighted or scoped 12- or 20-gauge turkey gun with a Modified choke screwed into the barrel in place of the X-Full might make the perfect squirrel shotgun. And besides having sights to help you center your pattern, you’d also have a camo finish to hide the gun.

New Gun Test
Mossberg 835 Grand Slam Over the years, I have changed turkey guns more often than Jennifer Lopez changes men. No longer: This spring, Mossberg’s new 835 Ulti-Mag Grand Slam 31/2-inch pump earned the title of “Phil’s Turkey Gun” for several seasons to come. With its 20-inch barrel, the Grand Slam measures 4 inches shorter and weighs 1/4 pound less than any previous 835 turkey gun. Even after I added a scope and sling, the gun tipped the scales at a manageable 7 pounds 14 ounces and measured a compact 42 inches. The barrel comes with Mossberg’s new, ported X-Factor turkey choke, which outperformed the old AccuMag choke considerably when I patterned it with 3-inch Winchester Supreme 6s. The receiver is tapped for a scope, and the rib bears adjustable fiber-optic sights. One complaint: The trigger, while not too heavy, feels squishy. In Mossy Oak New Break-Up and Realtree Hardwoods HD Green ($471; 203-230-5300; www.mossberg.com). -P.B.