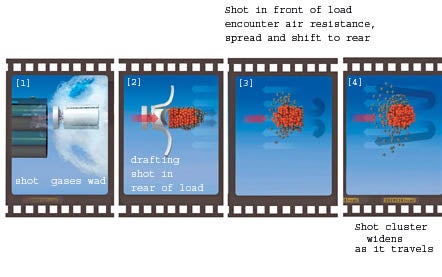 If you were to fire a shotgun in the vacuum of space, the pellets would stay nestled in their shot cup forever as they flew through the inky blackness. Here on Earth, atmospheric pressure affects your shot load as soon as it leaves the muzzle on its way to a clay target, a turkey, or a bird in flight. Those changes, which occur almost instantaneously, greatly influence the outcome of your shot:

**[BRACKET “1”] **Hot propellant gases expand suddenly as they exit the muzzle, creating the shock wave that we hear as muzzle blast. In the first 3 feet of travel, air resistance slows the load about 100 fps. The faster you drive pellets through the air, the faster they lose velocity. Increasing velocity by using fast loads does increase energy, but only slightly. If you need to hit birds harder, you have to shoot larger, heavier shot.

**[BRACKET “2”] **Air resistance pries open the petals of the shot cup, releasing the pellets. Shot cups protect barrels from hard pellets, such as Hevi-Shot or those made from steel or tungsten-iron. They also prevent soft lead pellets from being deformed by the barrel. A spent cup shows dimples caused by the inertia or “setback” forces that drive the pellets back into the plastic as it accelerates. A buffer made of ground plastic protects lead pellets at the rear of the shot cup from being crushed by the weight of the pellets at the front, enabling them to retain their round shape and fly truer.

**[BRACKET “3”] **Just 5 feet from the muzzle, the load has already lost about 150 fps in velocity. As it encounters air resistance, the pattern begins to open up, with pellets veering off in different directions. The pellets at the back of the pattern are “drafting” like racing cars tucked in behind the leaders. These trailing pellets will eventually form the central core of the pattern-the dense part with which you hope to hit the target.

[BRACKET “4”] The tighter the choke you use, the longer and narrower the shot cluster will be as it leaves the barrel, and the more “drafting” pellets that will remain in the pattern core. The load will also pattern more tightly in thin air than in heavier air due to the lower air resistance. Air is not uniformly dense-it’s denser at sea level than at high altitude, and cold air is denser than hot air. The difference may not be much, but it’s no coincidence that the record target pattern (most pellets in a 3-inch circle) was shot in the thin air of a hot, dry day. Hedge your bets in the cold, dense air of late season by shooting high-velocity loads, or by choosing one size larger shot than you ordinarily would and screwing in a slightly tighter choke.