Fine shotguns require a substantial investment, but they always pay you back. 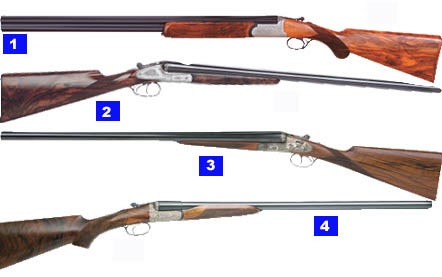 For most people, there are two kinds of two-barreled shotguns: the mass-produced models that are sold over the counter for no more than a couple thousand dollars, and the near mythical names such as Purdey and Holland & Holland, which can cost as much as luxury automobiles.

There is, however, a third category: shotguns whose price tags are a fraction of a Holland’s that are far superior to mass-produced models. Most of these fine shotguns are priced in the $6,000 to $7,000 range, and while that is not the $80,000 that you will lay out for a matched pair of Purdeys or $50,000 for a Fabbri, it is still a lot of money.

But it is an expense that can be justified, both by quality of the guns themselves and by the end result of their use. There is a reason that Bob Brister’s great book on wingshooting is called Shotgunning: The Art and the Science and not just Shotgunning: The Science. Much artistry is involved in the design, manufacture, and use of smoothbores. A really stylish shooter is as graceful as any other skilled athlete, and a fine double or over/under-as sleek and sensuous an object as man has created-enhances all forms of wingshooting.

When you propose such a purchase, you can expect stunned silence from your spouse, followed by righteous fury. Remain calm, dodge any thrown objects, and present the facts. Here are a few salient firing points for your defense:

Â¿Â¿Â¿ Fine shotguns, unlike some other expensive items, hold their value well. If you buy a $6,000 gun today, use it, and sell it in a few years, you can recoup as much as $4,000. If you hold onto it long enough, you can get back everything you paid and then some. A painful personal example: In 1970, I bought a Rizzini 20-gauge side-by-side and paid $750 for it. I traded it for another gun, which is also long gone. Today, that Rizzini is worth over $3,000.

Â¿Â¿Â¿ You will hit more of whatever you want to shoot with a fine shotgun. They handle better than the mass-produced ones, and they can be made to your exact measurements to fit you perfectly.

[NEXT “Story Continued…”] Â¿Â¿Â¿ They can be tailored to your specifications. If you fancy a beavertail fore-end and a straight wrist, that’s what you’ll get. You want extractors instead of ejectors, no problem. Do you shoot left-handed? The gunsmith will give the stock cast on instead of cast off.

Â¿Â¿Â¿ Owning one of these guns provides immense satisfaction bordering on snobbery, but it is a quietly understated form of superiority. You will find no gold inlays here, no ostentation, no vulgar display. No one will have a clue as to what you’re shooting unless they know a lot about guns, and then they will be blown away-figuratively speaking. Here are four models to consider:

1. Rizzini USA Round Body Game Gun
Round-action shotguns have receivers constructed from sections of cylinders rather than from squares with rounded corners, a design that makes for a graceful and good-feeling gun. Rizzini’s Round Body is a boxlock over/under with a single selective trigger, 28-inch barrels with screw-in chokes, and a semi-pistol-grip stock. The action plates, which are engraved in foliate scroll, can have either a multicolored case-hardened finish or a flat-silver coin finish. You can select 12, 16, or 20 gauge, and there is also a Round Body Small Action for 28 gauge and .410. Imported by Rizzini USA. $5,900 for 12, 16, and 20 gauge; $6,490 for 28 and .410; 610-344-7730; rizziniusa.com

2. Merkel Model 4SL Sidelock Side-By-Side
Some German shotguns carry such ghastly accoutrements as sling swivels, heavy bas-relief engraving, and limp-pancake cheekpieces. Not the 47SL. It is a lovely gun whose side plates are adorned with delicate English-style engraving, clean uncluttered lines, and graceful proportions. Gunsmiths have spoken to me in awe about the way these guns are put together, and your great-great-grandchildreen will bless your name for buying one when they shoot it in the 23rd century. The 47SL comes in 12 and 20 gauge with a straight or pistol-grip stock, 263/4- or 28-inch barrels, and double triggers only. Imported by GSI Inc. $7,495; 205-655-8299; gsifirearms.com

[NEXT “Story Continued…”] 3. Griffin & Howe Round Body Guns
Griffin & Howe’s Round Body guns are sidelock side-by-sides from the Spanish firm Arrieta. At one time, Spanish shotguns were famed for their great beauty, reasonable prices, and complete lack of reliability. Now, they are still beautiful and reasonably priced, and quite reliable as well. The Round Bodies were originally intended for shooters who wanted a fine gun but were not ready to spend $50,000 for an English “Best Gun” such as a Purdey. They come in all popular gauges, with a range of options, and you can get a true custom stock built to your exact measurements for no extra charge. $5,950 to $6,850, depending on gauge; 908-766-5171; griffinhowe.com

4. Dakota Superlight Grade III
There are three grades of Dakota Superlights: Grades I and II are guns to lust after, but the Grade III will set you to baying at the moon. It is a boxlock side-by-side that is built by the Italian firm of SIACE (see-AH-chay) in all the popular gauges-and some that aren’t so common-including 24 and 32 (no, that is not a misprint). The Grade III is designed for customization, and there are some nifty optional goodies-an articulated front trigger, a non-auto safety, and special serial numbers-that you can add. $6,500; 605-347-4686; dakotaarms.com